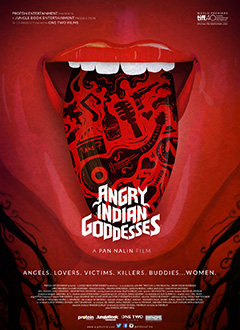 There’s a lot to take when sitting down for a watch of Pan Nalin’s Angry Indian Goddesses, which may reek of After School special to some. The film comes at a time when Indian actresses have begun talking about the disparity of salaries between actors and actresses, as well as the cringe-worthy question of the “shelf life” of a heroine as if women were hot items showcased for the season… which in an industry so reliant on visuals, they probably are.

Female-friendship movies are hard to come by in a film industry so focused on love, so whenever you got two actresses together, they’re usually fighting for the guy… So how can I miss the chance to catch one of India’s few all-female-cast films? The promotions aren’t clear on what Angry Indian Goddesses is really about, other than a bunch of friends getting together. From the get-go, we’re introduced to Joanna (aka. Jo, Maguera), a British-Indian ‘gori’ actress trying to make it big in Bollywood, shooting a B-grade movie where she’s required to show off her assets and scream for help for the Hero. Unable to keep her cool when hearing the nonsense requirements of her character, she storms off like the rest of our “Angry Goddesses” do when storming off a stage performance (Mad, Manchanda) after lewd comments, a business meetings with incompetents (Su, Mridul), a photoshoot that requires the magic of whitening Photoshop (Frieda, Dias)… or, you know, just grabbing a stranger by the balls for trying to get frisky with you on the streets (Laxmi, Deshpande).

It’s unclear how these women know each other until one by one, they start to gather in the charmingly old “Portuguese” styled Goa home of Frieda, who has invited all her friends— ex-boss Su, singer Mad, school geek arranged-married Pam (Gujral), and cousin Jo — because she’s getting married. The difference in them make them clash, as they reveal the troubles that have been holding them back as individuals. However, as soon they start to bond with each other, the arrival of environmental protester Nargis (Chatterjee) causes some more friction and revelations.

Angry Indian Goddesses may not be perfect, but it’s lovely (for the most part) and it was the film we needed. How often have you seen women seeing each other and just hanging out just talking about work, society and how their relationship to the men in their lives affect them emotionally– on Indian film. How many times have you seen a ‘gori girl’ (White foreign girl) that’s not a background prop in an item song, that’s not the outsider who has “corrupted” the hero, or who serves the hero as love interest and witness of his greatness. Amrit Maghera’s Jo is, of course, outspoken and critical when it’s needed, but seems to be the voice of reason when things seem to be going overboard. This is why the third act seems so absurd, almost to the point you expected Jo to open her eyes to look at her cousin saying “I take my acting seriously.”

My only criticism character-wise is that these women seem to fit a perfect checklist– you got the business woman who’s too busy and high-strung to properly attend to her obviously neglected daughter, you got the struggling creative individual who’s depressed for not having achieved as much as the others around her, the proper Indian girl who went for the arranged marriage but realizes she’s unfulfilled, the creative professional who found her day-to-day job wasn’t fulfilling enough so she quit, and never forget the angry activist. Without revealing too much, the whole cast did a great job, hitting its highest level of bonding during the pivotal revelation of who Frieda is getting married to.

Overall, I loved it. I may have needed a happy ending, but it does say it right there in the title that these are “angry Indian goddesses,” and mad they are as the badass representation of Goddess Kali, the fierce version of Goddess Durga.

Don’t forget to check out the interview I did with director Pan Nalin.