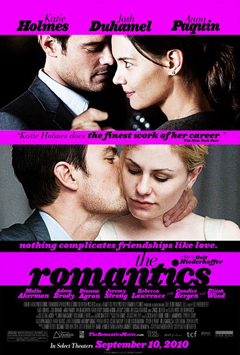 The Romantics tells the story of a group of college friends who get together for the wedding of their friend Lila (Paquin). However, tensions arise as Laura (Holmes) also had a thing with the groom.

First of all, who invites an ex to a wedding? Even if the ex happens to be a friend, in which case the relationship is left stranded. Second of all, who accepts an invitation to the wedding of someone whom you still harbor feelings for?

Lila and Laura do.

The Romantics, as the college group of friends refers to themselves as, are the most vapid and selfish excuses for human beings. Their words are empty, and their actions only pretend to self-indulge their urges. Instead of being adults and making choices, they pick a little bit of both.

In Lila’s case, feeling guilty about taking Laura’s boyfriend and inviting her to the wedding; in Laura’s case, resenting her “friend” but still considering her a friend. Two supposed best friends who stole each other’s boyfriends, and then there’s Tom (Duhamel), trying to be with one and the other… never wanting to make a choice, never wanting to close the door until it’s necessary.

Even if Paquin has the talent, the film is filled with forced situations of forgettable moments between most of the main characters. Duhamel seems to have no range and zero on-screen presence — despite his empirical good looks. Perhaps the film’s best scenes come with Paquin’s interactions with Lila’s little sister (Agron) and her mother (Bergen). However, the only way this movie could have worked is if it wasn’t about this group of people.