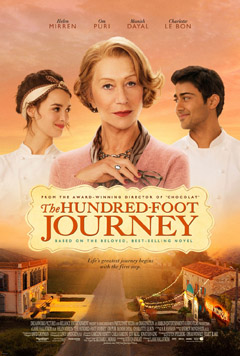 It’s hard to come off as fresh when you’re trying a pleasing and conventional genre like food films. Food films is a genre, people, and Japan (and many in Asia) have made countless of movies (and series based on novels and mangas) that surround the lives of people that love to eat and cook. They’re all feel-good predictable stories with likable leads that feature mouth-watering shots of food being prepared and eaten. The Swede Lasse Hallstrom shot to mainstream fame with one, featuring one of the world’s favorite French actresses and one of its biggest weaknesses: Chocolat.

In Hallstrom’s The Hundred-Foot Journey, we follow an Indian family from Mumbai who are forced to seek asylum in the UK after riots threaten the family’s prosperous restaurant, which was headed in the kitchen by Mama (Chawla in a short cameo) who imparted all her cooking knowledge and love onto her talented son Hassan (Dayal). After years in which the family -lead by Papa (Puri)- had unprosperously lived near Heathrow Airport where vegetables have no soul, they decide to head over to Europe for a more masala life.

The Haji family ends up settling in a rather remote, but quaint, ville in the south of France where Papa falls in love at first sight with an abandoned place in front of a one-Michelin-star restaurant owned by Madame Mallory (Mirren). When Maison Mumbai opens its doors, all hell breaks loose between Madame and Papa, while Hassan explores his relationship with food and Madame Mallory’s sous-chef, Marguerite (Le Bon).

Though Journey and Chocolat do share evident themes and plot points — outsider arrives to a small town with new flavors that ruffle some feathers — as a food journey, the film met me only halfway through. Some of the shots were delicious, of course, but I measure the success of the genre solely on my craving levels after all is said and done, and I wasn’t dying to hit the local Indian joint by the end of it. There are, however, definitely worthy elements- the biggest of them all is that you not only get one Asian man romancing a (white) woman… but you get TWO! This is unheard of [1]. We got Daniel Henney with Eliza Coupe on Shanghai Calling back in 2012, and you have to go all the way back to 2001 for Jet Li to (sorta) romance Carla Gugino on The One– actually, Jet Li’s a ladies’ man with Kiss of the Dragon and Romeo Must Die.

While a film with two Asian (Dayal is Asian-American) men making over $40M USD [1] is to be applauded, I did feel that having both love storylines felt repetitive making it lag at times, thinking the story was over a couple of times before it was (a case of Return of the King all over again). Now, as awesomely sweet and funny as Om Puri gets to be, what would I have given to have Mama instead of Papa having to struggle to sustain her family in a country that’s not her own, and having to go head-to-head with the unapologetic Madame, and then having them becoming friends instead! Or maybe that’s a girl and Juhi bias.

Overall, though, as a complete filmi foodie package, I’ll take Hallstrom’s take on this somewhat familiar story of food memory, roots and family, than the over-hyped foodie-slash-sorta-father-son movie that Jon Favreau’s Chef was. But nothing will ever come close to Ang Lee’s Eat Drink Man Woman.

P.S.: We’re probably the only non-Indian outlet that noted Juhi’s role.
P.S.2: Look at how much food is featured on the Japanese poster! People who like food go to watch these things at the theater.