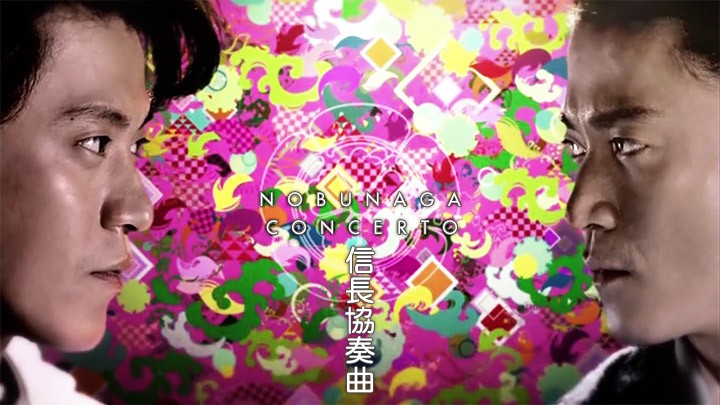 The name, the art direction and the intro to Nobunaga Concerto is a dead giveaway that the series — based on the manga and anime of the same name — isn’t your run of the mill jidaigeki [1] as it tells the unusual story of a teenage boy named Saburo (played unconvincingly -if you’re not used to Taiga dramas or El Chavo del 8– by 32-year-old Shun Oguri) who accidentally time-slips back to the Warring Era period [1], as he discovers historical figure Oda Nobunaga (Oguri working that double role) looks just like him.

And because all powerful people who fear prosecution dream of having a double, they switch places.

In between all the funny anachronism that Saburo pretending to be Oda Nobunaga entails, including wearing sneakers and taking selfies during a war, Nobunaga Concerto is a blow by blow of Japanese history for dummies as we meet our characters one by one– Nobunaga’s own family, which includes a fabulous Yuya Yagira playing the thirsty younger Oda Nobuyuki; a scene-robber Shibasaki Kou as Nobunaga’s wife Kichou, Hirofumi Arai as the stoic half-brother Yoshitatsu Saito, and their father Dosan Saito played by the ever reliable Toshiyuki Nishida. Each and every episode on the show will certainly have you checking Wikipedia after you’re done- the trivia feature on the DVD/BR release must be so much fun~~~

The first couple of episodes are engaging as they contain the most balance of comedy-Oguri’s scenes with the almost acidic Shibasaki are fun to watch against the most dramatic storyline of constant assassination attempts and betrayal, which continue to pile up throughout the series as it settles for the “period piece” with smaller and seldom comedic anachronisms; Nobunaga wearing socks or celebrating Christmas, for example.

At Nobunaga’s side, there’s also the loyal Tsuneoki Ikeda (Osamu Mukai), as well as the sneaky Denjiro Tahara (Takayuki Yamada)… who becomes Kinoshita Tokichiro and later Toyotomi Hideyoshi, who are all -mostly- names that do take part in the real story, and eventually fiction starts to fit in the history books and does spoil (or refresh) your following of the plot.

By the second half, the pacing becomes heavy with all the characters and historical battles you must keep track of, and it does end with a cliffhanger if you don’t know what was the fate of Nobunaga or who Mitsuhide Akechi is.

You can check out Nobunaga Concerto in a number of subtitles through Crunchy Roll. I recommend a paid account as the commercial breaks in misplaced scenes are unbearable.