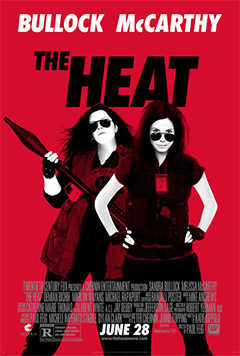 There’s something about The Heat that’s more disappointing than anything that your average buddy-cop movie might deliver. It’s hard to pinpoint exactly what that is, but maybe that’s just because there’s so much to be disappointed in.

Kicking off by showing just how arrogant Bullock’s FBI Agent is and just how much of a mess McCarthy’s cop is, The Heat slips into the usual buddy cop format all too easily and quickly. In order to find and take down a drug lord, the two end up being paired up and their contrasting personalities get the better of them more often than not.

With Paul Feig coming off from the delightful female-driven comedy Bridesmaids, one would have expected more from him. He’s a good director, who has proved that he can direct incredible pieces of comedy television along with the aforementioned film, but there’s little here to show that. It’s all very run of the mill action-comedy with nothing that really stands out.

The two leads barely have enough chemistry to get the movie by quickly, and standing at nearly two hours, that’s a big problem. Bullock and McCarthy seem like an interesting enough pairing, but it’s all about the writing. Nothing they try to deliver or bounce off each other is all that well-written. The same boring sex jokes someone would write for men in these roles have been transposed to women. This isn’t to say that there aren’t a few decent laughs spread throughout, but it’s a really hard ride to get through sometimes.

Anyone who has seen McCarthy and Bullock in Bridesmaids and Miss Congeniality respectively knows that they can both play hardasses with a sense of humor. Watching this, you know that they both know it as well, and yet they don’t really know how to find a decent stride in their performances until the latter half. In certain scenes, they’re actually almost overshadowed by some of the supporting cast members like Kaitlin Olson’s rather amusing turn as a Tatiana the Bulgarian prostitute.

Outside of its comedic moments, The Heat tries going for emotion occasionally, but it’s tough to feel connected to this couple of characters when they aren’t that well established. It’s nice at times and the chemistry in the latter half helps, but it’s not entirely enough to save it from the same pitfalls as most buddy cop movies. It’s a rather big shame that The Heat wasn’t all it was cracked up to be because these two ladies should have been heading a better film.