Land of the Deaf, The 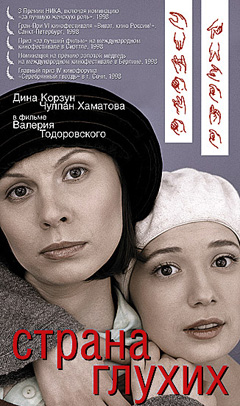 I have never in my life seen a movie featuring characters with a disability like in Strana Glukhikh. Oftentimes, films would revolve around main characters that are deaf/mute/blind/unable to walk who try to get accustomed to and deal with trying to include themselves in society, to struggle and find people who would be aids or obstacles in their soul-searching journey.

Russia’s The Land of the Deaf has nothing to do with depressing drama, despite being Russian and having that particular Russian sense of humor.

Set in contemporary late 90s Russia, Rita (Khamatova) is with her boyfriend Alyosha (Nikita Tyunin), who has a gambling problem and a seemingly huge debt with the casino. On the day Alyosha is set to settle his debt, he skedaddles, leaving Rita at the club where she meets colorful Yaya (Korzun), a stripper who turns out to be deaf but more than willing to let Rita into her world and help her with her problems.

In here, I loved the strange build-up that Yaya and Rita’s friendship gets, from complete strangers who form an incredible bond in just a short while. It seemed a little unreal, but Khamatova and Korzun’s chemistry was great, especially when Yaya gets all quirky, dreaming about their life together while teaching Rita sign language.

The movie gets a slight detour because Rita needs to deal with her boyfriend’s debt, but Khamatova’s scenes with Sukhanov are great as well, and they’re the ones with the most tension throughout, even if I never fully understood their connection to each other… but that’s also one of the issues between Rita and her bond with her Alyosha. Since we never really see it beyond that first scene, we wonder why she needed to pay his debt and stick around that long. I mean, he leaves her at the place where he has a debt. If he had been dealing with bad guys, and this had been a gritty drama, they would have killed Rita right there.

Even if parts of The Land of the Deaf seem a little “man-hating” at times, especially considering Yaya exclaiming she hates men all the time, the men in the story — though sketchy at times — aren’t black and white representations of their genders. Even the lousy Alyosha gets his (sorta) moment in the sun at the end of the movie, as Rita’s own feelings make no sense to him either.

Overall, though, I had a lot of fun watching The Land of the Deaf — going in for a bias for Khamatova and leaving with a bias for Dina Korzun. Will definitely track down her filmography when I’m done.