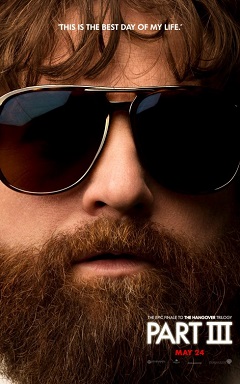 I’ll be honest here: I didn’t hate The Hangover Part III. Actually, I enjoyed it a bit more than Part II, but the first Hangover remains as the best of the entire series that should have never turned into a trilogy to begin with.

The Hangover Part III ditches its formulaic setup (sort of) from the first two films and puts the spotlight on Alan (Galifianakis), who hasn’t been doing well at all lately: he’s still a fuck-up as he has always been in the series, but now he’s off his meds and an unfortunate family event made him go even more out of control. When Alan’s family decides to send him to a rehab facility in Arizona, he agrees but only if the Wolfpack — Phil (Cooper), Stu (Helms) and Doug (Bartha) — drives him there.

On the way to Arizona, Phil’s minivan is rammed off the road by a rental truck and the group is taken hostage. Enter mob leader Marshall (Goodman), who wants The Wolfpack to track down Chow (Jeong) and bring him alive because he stole $21 millions from Marshall 4 years ago. The deadline: 3 days. If they fail, Doug dies.

Yup, Doug missing out on the action and the Wolfpack solving a mystery once again is repetitive. However, Part III is different because there is a sense of self-awareness through the film with references from the previous films (cameos included) as well as emotion and growth seen through the characters. The screenplay relies in points from the first two films to set up Part III‘s storyline and you can say this is the real ‘hangover’ because they’re dealing with everything they have done before, but now sober, bruised and without the amnesia trick activated. Part III‘s biggest problem is that it isn’t that funny [see: raunchy humor] to watch, but it makes up for the lack of humor with the mystery storyline and character banters… that is if you’re still invested in the Wolfpack. And I had fun watching them and I welcome the structure change. Judge me if you want to.

Anyways, The Hangover Part III is pretty much a Zach Galifianakis vehicle and to a lesser extent, it’s also a Ken Jeong vehicle. Chow has a much larger presence in the film thanks to his friendship with Alan as well as them being responsible for all of the events that happened through the trilogy. While Jeong is wildly hit and miss in Part III, Galifianakis rises to the occasion and shines at giving Alan closure in the final film of the series despite how unlikeable he can be in the film. On the other hand, Bradley Coooper and Ed Helms are sidelined as supporting characters who play second fiddle to Galifianakis while John Goodman’s Marshall feels menacing and serves to connect all the Hangover films together.

Overall, I liked Part III way more than I expected to. I will say that the best (and funniest) part of Part III happens in the post-credits, which is a “thank you” to those who sat through this franchise.