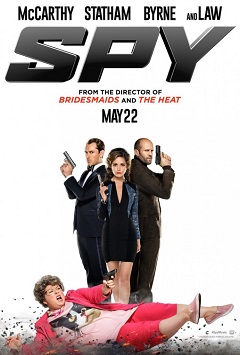 Spy marks Paul Feig’s fifth shot at directing a film while also getting to work again with Melissa McCarthy for the third time after Bridesmaids and The Heat. This time, however, things are different as Feig serves screenwriting duties and McCarthy now operates as a lead actress. I’ll start off saying that Spy is easily the best collaboration from both parties, but we’ll get into that later.

Spy follows Susan Cooper (McCarthy), an unassuming and self-conscious CIA analyst who has spent a decade desk-jockeying for (and crushing on) the dashing 007-esque Bradley Fine (Law). Cooper and Fine’s team dynamic works like a charm and they get the job done despite the complications that comes with their roles.

However, when one of Fine’s missions goes wrong and the CIA learns that all of their top agents’ identities are now known by Bulgarian arms dealer Rayna Boyanov (Byrne), Susan’s boss Elaine (Janney) sends her to the field to investigate on Rayna and find out about the nuclear bomb Fine was trying to locate and retrieve from Rayna’s father (Raad Rawi), much to the chagrin of Fine’s best buddy and co-worker Rick Ford (Statham). Originally, Susan’s mission was to strictly retrieve information from Rayna and not get closer to her at all. But things do not go as planned and Susan has no other choice but to play the game and become a spy under her very particular set of skills before things take a turn for the worst.

Like I said before, Spy is the best collaboration between Paul Feig and Melissa McCarthy. I enjoyed Bridesmaids (but I didn’t loved it) and The Heat wasn’t bad (yet not great), but Feig in Spy not only has improved as a film director and a storyteller, but he also manages to pull off a career-best (and Oscar-worthy, if I may say so) performance from McCarthy and he also does the same thing for Jason Statham. While both seem to be poised initially to suffer from typecasting here, they manage to avoid it through (sort of) against-type performances that makes Spy worth the watch.

While McCarthy effortless pulls off a transformation from shy desk-worker into an agile and legitimate badass motherfucker with quite the verbal offensive vocabulary that is sickly sarcastic and hilarious along with her well-executed physical comedy skills, it is Statham’s stellar comedic performance that proves to the biggest surprise of them all in Spy. We usually see him in 95% of his films as the skilled antihero/protagonist/antagonist who can be deadly and/or efficient — this year Statham starred on Wild Card and Furious 7 to prove that point. However, Feig puts Statham into Puss in Boots territory and makes him poke fun at his typecasting in glorious fashion while also being as profane as McCarthy’s character. It’s easily the best thing he has done in years and allows him to be viewed in a different (and positive) light.

The rest of the cast gets their shining moments. Jude Law and Allison Janney work very well as you would expect from them despite their few minutes of screentime, but Rose Byrne comes across as the third best act from Spy while Miranda Hart gets a nice film acting debut as Susan’s co-worker (and best friend) Nancy, who also experiences the same issues Susan has throughout the entire film. Peter Serafinowicz’s performance as Aldo is pervertedly funny and the on-screen use of Morena Baccarin works as a middle finger of sorts against Homeland… or it works as a big smile on your face if you hated the Brody family’s overstay. On the other hand, while Bobby Cannavale’s Sergio De Luca serves as one of the two main antagonists alongside Byrne’s Boyanov, he could have been used much better than what was displayed on screen. Had De Luca been injected with a dose of Cannavale’s Gyp Rosetti character (one of the greatest TV villains of this decade) from Boardwalk Empire — to cite an example, see two clips from the Season 3 premiere [1, 2] — Spy would have gained a much higher ranking from me. But at the same time, that would probably require taking the film into dramedy territory and maybe deprive us from the strong performances from McCarthy and Statham.

Nevertheless, go ahead and check this out on the big screens if you can. Highly recommendable for both fans of the action and comedy genre and you’ll most likely love the cast, especially McCarthy and Statham.