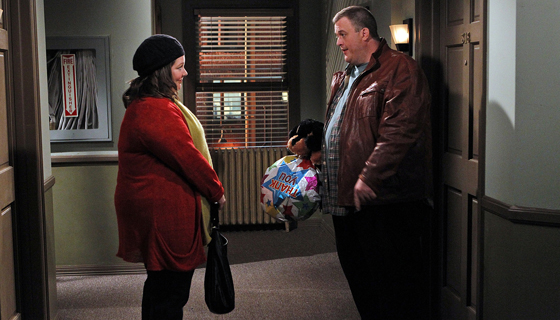 Created by Mark Roberts, Mike & Molly highlights two obese people falling in love with each other. Mike Biggs (Billy Gardel) is a police officer and Molly Flynn (Melissa McCarthy) is a fourth grade teacher. They both meet at an Overeaters Anonymous group and fall in love with each other. Their obesity isn’t the only thing they have in common, as they find each other to be mutually sweet, likeable and funny.

Mike & Molly is quite different from most tv shows currently on the air. And it’s been a while since a heavy weight couple has gotten the spotlight on primetime television like Roseanne. Billy Gardel and Melissa McCarthy managed to pull off the relationship between their characters pretty well, and to a certain extent they feel real to watch — they’re concerned with losing weight, but they still love each other for who they are and they aren’t presented as a perfect, good-looking people.

However, the supporting cast feels like we’re watching stereotypes of the characters that they’re playing and makes the show hard to watch. Swoosie Kurtz fares much better than the rest of the supporting cast in avoiding the stereotyping, but she suffers from it too. Billy Gardel suffers from that a bit as well, but not as much as the rest of the supporting cast since he benefits from having to interact a lot with McCarthy. Yet, the stereotyping makes Mike seem as if he is a real life version of Clancy Wiggum (The Simpsons) at times. Melissa McCarthy — who earned an Emmy nomination for Outstanding Lead Actress in a Comedy Series and found out about it while annoucing the Emmy nominations — stands out the most thanks to how she carries herself as a lead character along with her delivery of lines. She feels more real than the rest of the characters from the show.

The jokes are played out as a typical sitcom would do it — insert joke and have the laugh track activate. They’re either hit or miss, with most of the jokes [see: fat people jokes, sex jokes] feeling old — I think I already heard a few of the jokes on the other Chuck Lorre shows [see: Two and a Half Men, The Big Bang Theory]. And while the show is said to have the jokes make you laugh with the lead characters, you might laugh at them instead.

If Mike & Molly was polished better, it could have served as a strong counter for people who are tired of watching shows that highlight skinny, slutty people. While it isn’t a bad show, Mike & Molly is just an average show at best. It started off quite good and then lost steam thanks to the screenwriting, despite having James Burrows (Cheers, Will and Grace) directing all of the first season’s episodes. That said, the people in charge of the show should improve the writing for Season 2 — starting on September 26, 2011 — because there is a chance that the show might gain an audience increase thanks to Melissa McCarthy’s success in Bridesmaids.