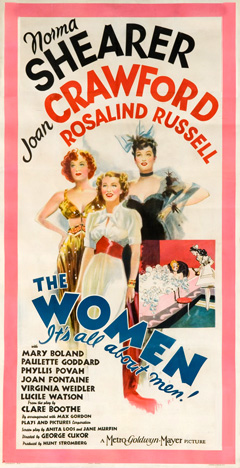 Look, I really – REALLY – love Greta Garbo. When I was on my movie affair with Garbo, going through the only DVD collection there is of her, I ended up falling in love with Joan Crawford on Grand Hotel. I’m not afraid to admit it, I have a huge torrid affair with Joan Crawford — that would be her thing, wouldn’t it? — I have spent a lot of money on Crawford, and I just gotta talk about how much I love The Women.

The film, which was remade in 2008 with Meg Ryan and Eva Mendez (what?), is a total flick about chicks. The Sex and the City of its time, The Women is about women… one of them, Mrs. Stephen Haines (Shearer) loses her husband — never to be known as other than the shape of a man — to a perfume counter girl, a bitch named Crystal (Crawford).

Mrs. Haines’ other bitch of a friend, Mrs. Howard Fowler (Russell) is having a blast with it, and oh! The rumors. The Women is kind of horrible — depicting women as nothing but backstabbing boy-hungry social climbers, but at the same time it is hilarious. Exaggerated to the point where there’s a Divorcée’s club of sorts, where all divorced women end up as they wait for the finalization of their marriages. The Women is the ultimate Mean Girls, featuring an array of women such as Paulette Goddard (who is lucky enough to get bitten by Russell), Mary Boland and country-yodelling Marjorie Main.

Though I love the jabs against each other between Shearer and Crawford — who obviously didn’t get along in real life, rumored to have been pitted against for roles — I was just rolling all over the floor with Rosalind Russell, whom in the middle of that Crawford/Shearer feud, ended up stealing their thunder with a wink ;D A lot of her humor reminded me of Peruvian comedian Roxana Ávalos (RIP), whom I grew up watching on screen.

There are directors who work wonders with women, and when you talk about George Cukor — that’s what you get. Cukor loved his leading ladies, and his ladies loved him… and it shows. The chemistry he gets from his cast makes the screen explode, and makes The Women a hoot to watch with anyone any gender and any age.

A really great intro to those who haven’t delved into the occult world of classic films.