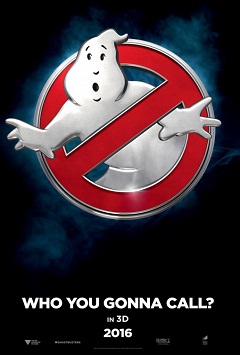 “If there’s something strange in your neighborhood, who you gonna call? Ghostbusters!”

Sadly, you can’t call the original team anymore with Harold Ramis dead. But there’s an all-female ghost-hunting team in town you can call instead if you need to solve your ghost-related issues. Good fucking luck on dealing with the guy who answers their office phone, because you’ll really need it.

Regarding Paul Feig’s adaptation of Ghostbusters, I haven’t seen a film of any kind receive such pre-release backlash as this one did, mostly due to the gender-swapping as well as people not wanting to see their nostalgia memories altered or revamped.

Can we all get along? I guess not.

I understand where people are coming from with statements in favor or against Ghostbusters, but it is only fair to fully assess any film for its worth after watching it. I’m not too emotionally attached to the Ghostbusters franchise, so the idea of seeing it getting revamped and gender-swapped could either work or not depending on who are involved with it. While the first trailer made me feel nothing in favor or against Ghostbusters, I was still curious to see if it would really suck as the pre-release backlash claimed it would, or if Feig could strike another solid comedy film after last year’s Spy.

The set-up for 2016’s Ghostbusters is rooted on the relationship between former best friends Erin Gilbert (Wiig) and Abby Yates (McCarthy), whom co-wrote a book about supernatural activity years ago but somehow ended taking different paths in their lives. In present day, Abby is still working on proving that supernatural beings exist alongside engineer Jillian Holtzmann (McKinnon), while Erin has moved on and she’s elegible for tenure at Columbia University. When Abby and Erin meet again shortly after Erin was made aware that their book was published without her consent and fears it could ruin her tenure chances, they head towards the Aldrige Mansion and end up noticing that not only supernatural beings actually exist, but they’re starting to appear in the city with more frequency.

With the truth standing in front of them, Erin and Abby form a ghost-haunting team that includes Holtzmann, subway worker Patty (Jones), and male secretary Kevin (Hemsworth), the latter whom happens to be both very attractive and clueless. They’re ready to track down who is letting these ghosts free and what they could possibly want.

Ghostbusters stands out from the original film not only because of its obvious gender-swap, but it tackles subjects such as bullying, Internet culture, sexism, loyalty and friendships. The movie feels harmless to watch for the most part and works so much better as a comedy rather than as a remake. I know that’s weird to admit, but that’s how I felt about it. There’s a good chunk of laughs from the team, but Kate McKinnon and Chris Hemsworth are the ones who stand out very strongly as scene-stealers.

“It’s really easy sit there and be the naysayer when you don’t actually do anything.”

On the other hand, the co-lead performances from Wiig and McCarthy were good, but they felt quite low-key as the spotlight was mostly put on the lesser known Saturday Night Live alumni. McKinnon came across as a huge breakout star while Jones’ Patty was funny yet she also came across as a racial stereotype at times. I had no problem with Hemsworth’s character being too stupid to live because he was hilarious. Overall, the main cast are really entertaining to watch on their own merits, and most of the best scenes are with the 4 women together.

As a Ghostbusters film, however, it’s hit-and-miss. Special effects are good for the most part as you’d expect from a film with a big budget, but Feig’s direction and the script lacked the rawness, spookyness and the embracing of NYC that made the 1984 film a classic for many people. The cameos from the original cast members aren’t all that great, with Bill Murray’s cameo feeling odd to watch despite being a big turning point for the main storyline. Original cast members aren’t the only ones being misused, as the likes of Michael Kenneth Williams and Matt Walsh were hardly noticeable, and employing Neil Casey as the main antagonist instead of Charles Dance felt like a wasted chance to display a better villain. There’s lots of nostalgia moments too, and they were fun to watch, but the way Slimer was displayed during the big final act felt pretty lazy to watch.

While I still had lots of fun with Ghostbusters, maybe the film would have been better off by emulating The Force Awakens and blend new and old characters into a familiar storyline in natural fashion without alienating the fanbase. Feig’s film and the cast are not worthy of extreme hatred, but the film isn’t outstanding nor better than Bridesmaids or Spy in regards to Feig’s previous works. Nonetheless, you can enjoy it just fine.

Extra quarter star for Hemsworth and McKinnon, the latter deserving all the praise and worldwide recognition possible.

P.S.: There’s a post-credits scene in this film.