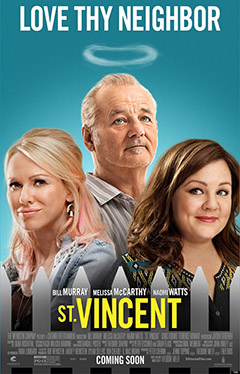 St.Vincent is in its essence a crowd-pleasing film, which means everyone with a beating heart will like it, or at least, will appreciate it. And there’s nothing wrong with that. It doesn’t have an innovative storyline, or cool effects, or a major twist. It is a story about hope, and about finding love and a family in the weirdest of situations. It has a very sincere approach and Bill Murray shines in his best performance since Lost in Translation.

The story  is quite simple: Vincent (Murray) is a lazy alcoholic, who lives alone, curses at everyone and enjoys casual sex with a pregnant prostitute called Daka (Watts). He is barely surviving, and he’s heavily indebted. There’s no apparent way of getting out of this situation, until he meets his newly arrived neighbors in the form of Maggie (McCarthy) and her son Oliver (Lieberher). Maggie has to work long hours at a hospital since she is now a soon-to-be divorced mom. Oliver, on the other hand, has no friends and has nowhere to go after school.  So she agrees to pay Vincent a couple of bucks to take care of Oliver while she’s at work. Vincent takes him gambling, takes him to a bar, teaches him how to defend himself from his bullies, and even teaches him about “the ladies of the night”.  They bond, and they become better people because of their odd friendship.

St. Vincent is really enjoyable and charming. Murray and Lieberher are really great together and you can’t help growing fond of them. They share a rare on-screen connection which doesn’t seem forced or fabricated and manages to elevate both of their performances. “The realization that in life there can always be a new beginning” theme can sometimes be turned into a boring and banal storyline, but this take in particular is cute, soulful and well-executed.

A lot of this movie’s freshness has to do with the fact that Bill Murray doesn’t appear in too many films. He does a couple of cameos and plays some parts here and there, but he is rarely seen as a leading man. It was really pleasing to see this great actor on the main part. Also, Melissa McCarthy has a lot of potential and acting range. Do not typecast her with buddy-cop/funny-sidekick roles [see: The Heat, Identity Thief and the upcoming Spy] since she’s able to do so much more than that

P.S.: I’m giving this film half an extra star because of Chris O’Dowd playing a cute priest. Sue me.