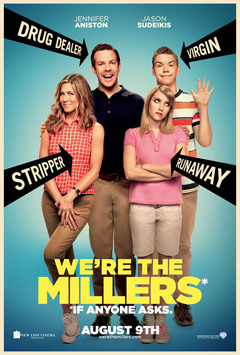 Nobody on this site wants to watch comedies with Jennifer Aniston — at least not any longer. Fine. You got me there, feeding me this trailer in a rare cinema outing where I actually chuckled at Will Poulter singing to TLC’s Waterfalls [MV].

I’m rather impartial with Thurber’s list of films under his belt, and We’re the Millers doesn’t seem to change a thing. In here, we got Sudeikis… who’s actually the “star” of the film — despite Aniston taking lead credit — playing David, a man boy living the life of a hip drug dealer. He’s got fancy products, loads of cash stashed in his rather pretty fancy apartment and takes your order via his iPhone. Queue product placement. When David runs into an old college pal he barely remembers, who already has a family with kids and living the “American white picket fence dream,” he is reminded that nobody would care if he dropped dead, but he seems unfazed by this.

After trying to collect a $400USD debt from the now ex-boyfriend of his sexy stripper of a neighbor,  Rose (Aniston), David runs into his boy-next-door neighbor Kenny (Poulter) who is the dork and clumsy guy who tries to be the knight in shining armor of Casey (Roberts), who’s being mugged down the street. After Kenny reveals David is a dealer, and the thugs sack his place leaving David with nothing, he is coaxed by his boss, Brad Gurdlinger (Helms), to smuggle “some” merchandise across the border with the pretense of working for some Pablo Chacon.

To avoid being detected at the border, David enlists this gang of sarcastic folk — except for Kenny who volunteers out of the goodness of his virgin heart — to go to Mexico pretending to be a family, and smuggle the drugs out of it for money. Of course, sh!t happens in this R-rated National Lampoon’s Vacation.

We’re the Millers is… mostly painless. Except for the times it feels like it drags, and the road back to America seems so long. I thought I had a chance to laugh a lot more with Will Poulter’s character, but most of his highlights were already on the trailers. But if you really want to enjoy his talent to the fullest, you should check him out on Son of Rambow. Whereas Emma Roberts seems palatable, her character seemed almost like an extension to Aniston, who surprisingly doesn’t make you cringe. Neither her nor Sudeikis steal anyone’s thunder, though, they’re better when they’re together with the whole family… or better when they’re alone with the Fitzgeralds (Offerman and Hahn). In fact, some of the most off-beat things Hahn said during these were about the only things that had me bursting out  a ‘what?‘ instead of just chuckling.

Plenty of dick moves all around from Helms to Sudeikis and from Sudeikis towards everyone — which gets a little exasperating — especially towards Poulter’s character who really took all the punch of the jokes. Poor Kenny.

I didn’t love it, but I didn’t hate it as much as I thought I would. There.