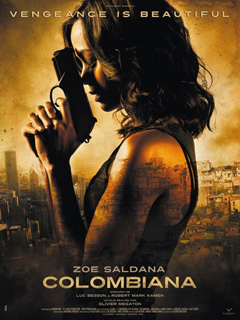 Dear Luc Besson has been going through a really rough patch lately. Not since the 90s with hits like La Femme Nikita, The Fifth Element and his staple, Leon — about the little girl whose family gets killed by a dirty cop and wants to become an assassin — has he seen some sincere success — unless you count 2008’s Taken, which starred Liam Neeson as a father trying to save his daughter from the slave trade.

Colombiana, starring Zoe Saldana, is being seen — unofficially — as a continuation of sorts for the story of Mathilda in Besson’s Leon.

In it, little Cataleya, played by Amandla Stenberg — whom we will see in the upcoming The Hunger Games — sees both her parents get killed, the result of being caught in some dirty business in the dirty world they’re stuck in. Before the last crossfire, Cataleya’s father gives her classified information which she’s to take to the American embassy where she will be protected.

Cataleya, after masterfully escaping all sorts of situations as if she had been trained in Hanna, manages to get to Chicago where she meets her tio Emilio, played by Cliff Curtis, who switches ethnicity in every movie he’s been cast. Wanting something different for his niece, Tio Emilio wants Cataleya to enroll in school. Instead, she tells him that she wants to become an assassin.

Colombiana is a revenge story, where Cataleya spends years trying to call the attention of the people that killed her family. We know where things are heading. The relationship between her and Emilio is not developed enough to make us care much for Cataleya, whose own selfish reasons for revenge don’t do much for character development as it does to move the story. In fact, all the elements trying to build her as a person, like her not-an-on-off-relationship with Danny (Vartan), work quite miserably on screen. They make it seem like we’re wasting time which would have been better spent building up Cataleya’s relationship with her Chicago family.

What is probably the most distracting detail in the whole film, however, is the un-Colombian aspect of a film called “Colombiana”. It is not just its geography — Mexico does not look like Colombia — but also the broad array of accents throughout the film. Why was the whole starting sequence shot in English?