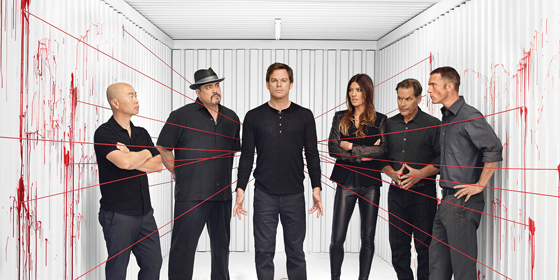 I think I was the only one in the whole site that didn’t mind last season — especially in regards of Hannah McKay and Strahovski’s subsequent participation on this final season — to the point that I was interested in what Dexter (Hall) and Deb (Carpenter) would do after the final episode last year. The possibilities were endless, and Deb’s path could go anywhere.

The first false step of this last “first episode” was to fast-forward us six months into the events to had taken place. Dexter had, as always, managed to move on disregarding what his sister might have felt. In turn, Deb had become a wreck- she quit Miami Metro for a job at a private investigator agency, where she has been risking her life and has been consuming alcohol and drugs just to avoid her reality with her murderous brother.

In the meantime, a new serial killer nicknamed The Brain Surgeon is making his rounds in Miami as some Dr. Vogel (Charlotte Rampling) magically shows up in the city to tell Dexter that she was the reason Harry (James Remar) gave Dexter The Code for which he rules his life.  As Dexter and Deb deal with their fraternal issues, Hannah returns to Miami and sh!t hits the fan because it’s the end and everything must get complicated.

Dexter got off to quite a nicely paced start, I must admit, with exposition on his relationship with Dr. Vogel as his mother figure… which leads to one of the most bizarre dinner table scenes in Ep.08 Are We There Yet?. While the drama between brother and sister is, to me, one of the saddest and most stressful parts of the last two seasons. However, it’s in the middle of the season when it begins dipping in quality with an added storyline with Quinn (Desmond Harrington) who has outlived his storylines too many-a-time — especially in the love department, this time with Jamie (Aimee Garcia) — Deb’s tension with her boss, and perhaps Masuka’s realization that he has a daughter… even if his reaction to finding out was priceless.

It’s a sad dismissal of the show, for sure, which seems like a shadow of what it was in Season 1 and managed to shock by Season 4, but it still had its decent moments. Those who will remain watching until the end next week will probably be doing so out of commitment.

I’m just really sad because Jennifer Carpenter has been really carrying the show since Deb discovered who her brother is — all the heaving, the tears, the anxiety attacks and the existential crisis for little recognition.