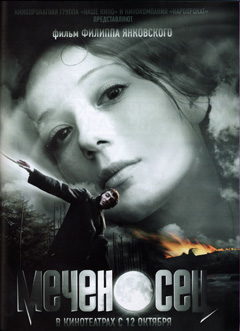 Imagine Wolverine had only one blade. That’s exactly Sasha’s (Tkachenko) curse (or gift). When emotions run too high, it comes out of his hand and people are killed. At times he might seem like  the closest thing to a superhero, saving his mother from his abusive father, but his ability gives him more grief than anything else. Sasha is unable to live among people as he brings destruction and death wherever he is… until the day he meets her (Khamatova).

Sounds awesome, doesn’t it? The Sword Bearer could have been. It’s got pretty great production value, it looks the glossiest at times, and it’s got some decent acting (given the material). However, as the agonizing minutes pass by, the movie keeps on deteriorating with one-dimensional character after another. It didn’t help that I recently watched that Buffy vs. Edward Remix [1], highlighting the weaknesses in a character like Edward. Oh, yeah. I’m comparing this romance to Twilight.

Sasha may be a cursed (or gifted) child, but instead of evolving into a vulnerable hero, he devolves into a sulky boy that has no desire to be in control. His blade may come out when he’s distressed, but that has nothing to do with his temper. Sure, he got beat up for no reason at all, but instead of walking away, he waits for them to come back and kills these people. Killing is his nature, and we’re supposed to find this romantic?

His self-imposed exile doesn’t affect us emotionally because it’s another ploy to get the story going and to get Sasha to meet The Girl in the most ridiculous of ways. Don’t even get me started on The Girl (who later gets a name) whom Sasha falls in lust/love with. The sexual aspects of their relationship isn’t a problem, instead it’s the inconsistencies in Khamatova’s character. In a moment, she stared with incredulity at Sasha’s jealousy being displayed at a club, the next she approaches him to passionately kiss him and have loads of sex. The next she’s terrified of Sasha’s killer nature and calls the police, to then help him escape and elope with him. If Bella Swan is waiting for Edward to always save her despite Edward’s killing nature and desire to hurt her (or others), then The Girl isn’t much better than her.

The Sword Bearer then reaches its third act and you just can’t wait for it to be over. However, it doesn’t even end right! Instead of ending everyone’s misery, are we supposed to feel sorry for Sasha’s loss? I would have probably cut the film when Sasha and his girl leave and the police finds out what had happened with the captain’s family as he realizes that maybe Sasha isn’t “too” bad.

Even though I’m a little disappointed that Chulpan Khamatova played a damsel in distress role here, I was wondering if she had other roles in her filmography that didn’t play on her ability to be whimsically charming like in The Land of the Deaf or Luna Papa. In here she gets to play the most sexual role I’ve seen her play until now. Then again, I’ve still got other films to watch. At the moment, this is the worst movie I’ve seen her do.