Man with the Iron Fists, The 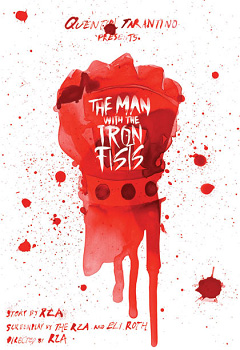 Right from the opening credits, it’s almost impossible to take RZA’s The Man with the Iron Fists seriously, and those who do have chosen the wrong film to watch. This wildly violent and ridiculous martial arts flick is far from great, but I’d be lying if I said I didn’t enjoy myself plenty.

Iron Fists follows one big cavalcade of characters in a feudal Chinese village. The tale begins by introducing a former slave turned blacksmith (RZA) who provides weapons for anyone who pays, including Silver Lion (Mann), who murders the leader of his clan, Gold Lion, and takes over. While trying to murder the son of Gold Lion, Zen Yi (Yune), and officially take over the village with the help of Brass Body (Bautista), Silver runs into trouble from the blacksmith, the local brothel manager Madam Blossom (Liu), and a British soldier named Jack Knife (Crowe).

This all sounds fairly tame, but there’s a lot to leave in the shadows to avoid spoiling all the laughable things that come along with a story like this. Considering Eli Roth’s past work writing movies, from Hostel to Cabin Fever, anyone who walks into this should know to have low expectations, even with RZA taking his first shot at writing. There’s plenty of terrible dialogue, some amusing and some just plain bad. However predictable they are at times, all of the silly twists and turns make the story move along smoothly.

Iron Fists marks both RZA’s screenwriting debut and directorial debut, and his work here isn’t all that bad. Handling a cast with talented people like Lucy Liu and Russell Crowe isn’t for everyone, but he manages it well enough. There are plenty of great fight scenes, most of which are set to rap music. Chi Ying Chan also brings some nice photography into the mix when showing off some of the film’s other positive aspects. The film’s best feature would certainly be its costume and set design, with the brothels pink and gold drapery popping in every scene it’s featured.

As for the worst, that would be Dave Bautista’s so-called acting, along with the very existence of his character. RZA’s direction is fine, but his acting isn’t much better than Bautista. The film, thankfully, has Liu, Crowe, and Mann to balance things out with solid and humorous performances. Crowe loosens up like never before, Liu isn’t quite as demanding as in Kill Bill, but close enough, and Mann brings a lot of fun in his traditional villainous kung-fu movie nature.

A debut like The Man with the Iron Fists isn’t something you come in contact with often, and RZA has delivered a movie that will likely leave everyone feeling like they’ve been punched in the gut. Whether that’s a positive or not is entirely up to you.