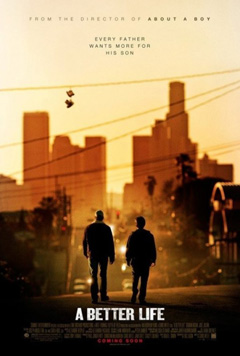 A Better Life tells the story of Carlos (Bichir), who hasn’t asked much from life as an illegal immigrant in the United States, except for a quiet subsistence as a gardener for the wealthier people of L.A.

At home, Carlos has to deal with his son Luis (Julian), who only speaks English and is often in trouble at school for stupid reasons. Carlos, trying to reach his son, has learned to speak English — quite too perfect for a first generation immigrant who has generally kept to himself at work, to be quite honest.

When the opportunity to be his own boss shows up, along with the chance to give his son a better future, everything turns for the worse as father and son strengthen their relationship to save what little they have left.

To be brutally sincere, I wanted this movie to be good. As someone whose family immigrated and has other parts of family migrating to other countries, I wanted Demian Bichir and this film to be able to connect with immigrants around the world. As a second-plus generation Chinese immigrant in Latin America with parts of her family in Europe and the United States, I know what languages are spoken at home and how many smacks for speaking inappropriately one can get. However, amongst all the drama there are also loads of cultural laughs and sincere enjoyment. However, A Better Life never stops being a purely frustrating drama that has nothing to do with Bichir’s performance at all.

In fact, he’s really the only thing holding this movie together. I know we’re probably being harsh on Jose Julian, who’s marking his most important role with this film. But the character of Luis had little to no charisma to him. The script called for him to act out stupid action after stupid action, leaving all the heavy lifting to papa Carlos.

The lack of guidance from Chris Weitz, with his not-so-young younger cast, was completely distracting from the film — not only because of the uneven performance by Jose Julian, but also because of the people that played his friends, who, thanks to the script, played pretty stereotypical Mexican kids from gangs, tattoos, silly attitude and all.

The film does pick up by the last moments of the film, but it’s literally too late to be invested in these people. The last scene between father and son, which should be bringing everyone watching the film to tears, is met with a “Finally, there’s something good!” Overall, A Better Life turns out to be a weak family drama that lacked half of the acting power needed to make the film work thanks to the lack of direction from Weitz and a weak handling of the script.

A Better Life is part of the World Cinema section at the Tokyo International Film Festival 2011.