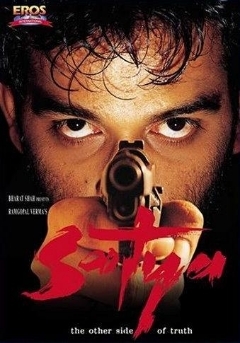 For a brief moment about a decade ago, Ram Gopal Varma garnered some interest in the West as a genre maverick who had little use for the conventional grammar of Bollywood filmmaking. At least one critic compared his experimental tendencies, not to mention his prolific production outfit, with that of Hong Kong auteur Johnnie To. It’s a shame that Varma was discovered just when his career was about to take a nosedive; he especially drew the ire of local audiences with an ill-advised remake of Sholay, the most popular Indian film of all-time. In recent years, Varma has drawn more attention for his controversial comments than for any film he’s produced or directed.

This shouldn’t prevent movie fans from exploring some of Varma’s earlier films, especially Satya (lit. “Truth“), which is quite possibly his finest achievement.  Reportedly inspired by the actual alliances and rivalries in the Mumbai underworld, this first of a loose trilogy of gangster films—also including Company (2002) and ‘D’ (2005), which Varma only co-wrote and co-produced—is a gritty and intimate account of an otherwise intelligent common man’s witting choice to join a ruthless, Darwinian world.

Unlike most Bollywood efforts on this subject, Varma largely avoids offering moral platitudes, instead allowing the images of violence, brutality and corruption at all levels of society to crystallize his ideological views. The film’s unlikely, bearded lead, Tollywood [1] actor J.D. Chakravarthy, is superbly understated as the eponymous migrant, an orphan who encounters ill will at every turn. He gracefully allows then-newcomer Manoj Bajpai to turn in a infectious, star-making performance as a volatile yet ebullient ganglord who gradually ends up becoming Satya’s subservient.

Although a rather unnecessary romantic duet picturized late in the film on Chakravarthy and his love interest (a low-key Urmila Matondkar) was likely due to commercial demands, Varma otherwise makes good use of the moody compositions provided by Vishal Bhardwaj, who at the time worked solely as a music director. The offbeat lyrics courtesy of the great Gulzar, Bhardwaj’s mentor and frequent collaborator, only add to the effort. Another highlight is the haunting background score by Sandeep Chowta [1].

Deftly co-written by character actor Saurabh Shukla and another future director, Anurag Kashyap—whose own two-part gangster epic, Gangs of Wasseypur, clearly owes something to this work—and shot largely on location in a handheld, vérité style by Gerard Hooper and Mazhar Kamran, Satya is as deeply moving as it is politically astute. And it is one of the greatest Indian films of the nineties.