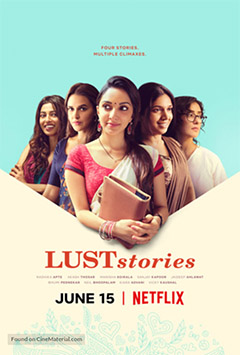 Hello, long time no see. I’m back from my unannounced hiatus, and y’all gotta thank (if you missed me) Netflix and their decision to come up with a sequel -sorta- to the Indian film centenary celebration anthology of Bombay Talkies; reuniting Indian filmmakers Zoya Akthar, Dibakar Banerjee, Karan Johar and Anurag Kashyap to tell stories centered on women’s lives and their desires set in contemporary India.

We begin our journey with Kashyap’s satirical short, co-written by Radhika Apte, who plays a professor who ends up -consensually- bedding one of her (of age) students. That’s followed by Akthar’s short centered on Bhumi Pednekar’s character who plays a domestic help that’s having a physical relationship with her bosses’ son and must serve the family treats on the bridal prospect meeting. Next up, Banerjee centers his bittersweet story on Manisha Koirala’s character who’s having an extramarital affair with her husband’s best friend/lawyer. And finally, ever the king of self-reference, Karan Johar serves the humor with the story of Kiara Advani’s character who, having not ever tasted the “ice-cream” other boys had offer before, ends up married in the hope of discovering pleasure.

Overall, the balance in Lust Stories is better than Bombay Talkies –despite the cheap marketing ploy of selling this as a “sequel,” it’s just the same directors doing four shorts for a new anthology. My favorite of the segments is a toss-up between Zoya Akthar’s and Dibakar Banerjee’s; the latter one for bringing back Manisha Koirala to my screen (I have yet to catch Dear Maya). However, I really found Akhtar’s short -written by Ruchika Oberoi- the most striking from start to finish, because it’s one of those telenovela tropes you’ll find in soap operas in Latin America— the domestic help that’s having an affair with “el patrón,” but with a spin. It’s just like the modern spin Akhtar gave to the 90s masala One Big Happy Indian Family with Dil Dhadakne Do. I don’t follow any major Indian soap operas, but it’s not a common storyline in the commercial rom-coms I’ve seen. And Pednekar is pitch-perfect in the role; every silence and every hurtful situation she had to endure. One of my favorite actresses this generation.

Kashyap’s is the hardest to decipher, I still think it’s unethical for Apte’s character to bed her student (despite the consensual relation); however, Apte’s batshit crazy shenanigans was outstanding. Karan Johar is the most what-you-see-is-what-you-get example, and probably delivers the most “audience-friendly” short at the hand of Sumit Saxena (Pyaar Ka Punchnama), and scene-stealer indie darling Vicky Kaushal. Nevertheless, I will never EVER listen to Kabhi Khushi Kabhie Gham [clip] the same way ever again thanks to Johar, so I tip my hat to you, Sir. Let us all learn to not leave controllers lying around where the elderly can use them.

As a whole, Lust Stories might seem like a regular anthology for people not familiar with Indian cinema — or who knows, maybe it’ll surprise them! — but you don’t know how refreshing it is to listen to uncensored swearing and actually reading the word “bitch,” instead of the common “witch” I have encountered on many of the subtitled films I’ve watched.