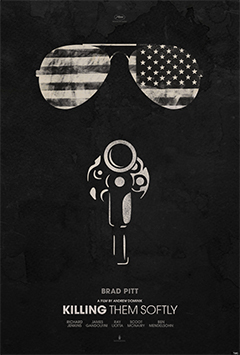 You don’t usually expect movies that take a distinct stab at the economy to take place in the seedy crime world that Andrew Dominik makes here, but Killing Them Softly does just that.

After finding out about an easy-to-hit card game from a friend, Frankie (McNairy) and Russell (Mendelsohn) rob the host (Liotta) and players of their money. To find out who took the cash, Jackie Cogan (Pitt) is hired to take care of business and punish those responsible.

Dominik & Deakins were a combination to be reckoned with in his last film, The Assassination of Jesse James by the Coward Robert Ford, but director of photography Greig Fraser does a fine job with Killing Them Softly. There are scenes that have this beautiful hyper-real feel — notably those where Ray Liotta suffers most — and others that make one feel as though they’re in an absolute daze. The robbery scene especially is masterfully done, tensions extremely high while watching these amateurs at work. It’s simple, but utterly fascinating.

There are a more than a few scenes that feel unnecessary though — the middle act riddled with pointless chats with James Gandolfini’s over the top character — but plenty of the dialogue is solid, either working towards the story progression or adding some humor to this dark world. Chats between Pitt and Jenkins made for the best bits, doing both of the aforementioned.

The first act is great at establishing everything we need to know before the action begins and things take an interesting turn once Dominik hands things over to Brad Pitt and it becomes his show. There’s some major lag in the middle, but the moment McNairy and Pitt’s characters meet is the minute the film picks up again. From there on it’s an engaging ride helped along with excellent performances from both men.

Subtlety gets thrown out the window and shot a few times in this talky crime piece. We don’t see all that much money going around, but we do see the economy of this crime community crumble down. This is complemented by an obscene amount of political speeches by Barack Obama and George W Bush edited in, be they slightly faded out during a robbery, in the title sequence, or just while Gandolfini strolls through the airport.

None of that is as blatantly in your face as the final speech of the film, which encapsulates everything that America and the film are about with its last lines:

“This guy wants to tell me we’re living in a community? Don’t make me laugh. I’m livin’ in America, and in America you’re on your own. America’s not a country, it’s just a business. Now fuckin’ pay me.”

For all its imperfections, Killing Them Softly is still a very different film that stands out in the gangster genre and delivers an amusingly unsubtle commentary on the state of the nation.