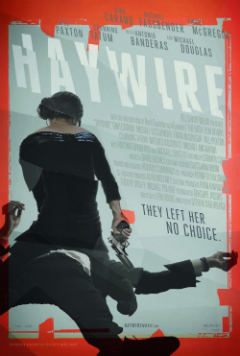 Sex, drugs, war, disease, crime and comedy— Steven Soderbergh has done a little of everything. His decision to leap into action has definitely been a good one, as he adeptly brings us the intensely entertaining flick Haywire.

Soderbergh’s action film revolves around Mallory Kane (Carano), a freelance operative frequently hired for covert missions that can’t receive government authorization. After a hostage rescue in Barcelona, she is sent on a seemingly simple mission to Dublin that goes awry. Realizing that she has been betrayed by the men who hired her, Mallory must use her skills to escape and outlast her enemies in order to discover the truth and stay alive.

Haywire is a sophisticated action film that set high standards for other films in the genre this year. It should come as no surprise that the fight sequences are top-notch, given Gina Carano’s previous career as a mixed martial arts fighter. She does a wonderful job in the lead role of Soderbergh’s film, not only in fighting but in acting as well. She goes from surprisingly seductive to scathingly vicious without a moment’s hesitation. Strong female roles in action films are rare and it’s pleasant to see a new action star on the rise. One might even suggest that she’d be the perfect choice if and when Wonder Woman needed a successful comeback.

The film comes with no shortage of big names— Michael Douglas, Antonio Banderas and Bill Paxton among them— while also featuring actors like Michael Fassbender and Michael Angarano. Among the supporting cast,  Fassbender and Ewan McGregor stand out. Both men play characters with professional ties to Mallory and compliment Carano’s performance. McGregor is sharp and serious while Kenneth and Fassbender help to provide what might be one of the sexiest fight scenes in an action film.

When it comes to the writing, Lem Dobbs does his job at providing the movie with just enough framework for the film to work. The screenplay is really nothing more than a serviceable map for Carano to beat her co-stars senseless in wonderfully choreographed fight scenes that echo the early James Bond films. Much like his work on The Informant! Soderbergh draws upon that 1960s movie feel. Not only does he provide gorgeous scenery with shots taken in Barcelona, Dublin and other scenic cities, but he captures the intensity that an action film deserves through the close combat his actors engage in.

For an action film, Haywire is pleasantly realistic as was Contagion, his previous disease drama film. Soderbergh’s work as the director of photography and editor of the film is as notable as usual, as the distinct visual experience he brings to the screen feels familiar and appealing to the senses. While some may complain that Haywire isn’t smart or plausible enough to work, Steven Soderbergh achieves his goal of delivering a fun and fast-paced film that showcases its star as intended.