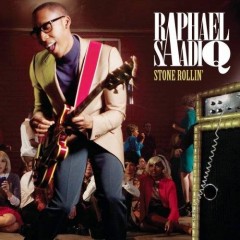 Raphael Saadiq comes back to resurrect the music industry with tracks that are as sexy as they are insightful. He’s always managed to bring the best out of his music. His fourth studio release, Stone Rollin’, is no exception.

Lyrically, Stone Rollin’ is as poetic as it is honest. For instance, he follows lines like “Girl, whatcha booty doin,’ I just can’t explain” with “I’m a good man, food on the table. Working two jobs, ready, willing and able.”  For some the album may come across as gimmicky, following the soul and swagger of 60s R&B a little too accurately. However, Saadiq paints himself as the modern-day bluesman, able to do lyrically what the likes of Robert Johnson and Blind Willie Johnson did in the Delta.

Title track Stone Rollin’ meets us halfway through the album with a guitar tab reminiscent of Teenie Hodges (co-writer and guitarist of Al Green’s baby makin’ Love and Happiness) and a backbeat that could crack your spine. The remainder of the album continues to let the body slip into a sensual groove, awakening a mood in us that’s begging to be touched.

Stone Rollin’ is an album that entices the listener to beg for deep touch with a purity and honesty that leaves us open to new sensations. What’s intriguing about Saadiq is with whom he chooses to collaborate. On track Just Don’t, Saadiq pairs up with Koop vocal mainstay, Yukimi Nakano. With the lilting lullaby of Nakano, he creates something as light as whipped cream but as rich in musical complexity and texture as a French pastry.

Saadiq’s lyricism is straightforward and impactful, giving a backbone and heartbeat to his sound. From a musical standpoint, Stone Rollin’ transcends the notes, breaking through sound barriers in order to lay hands on a weary soul, put lips on a lonely throat.

Preview on Xiami | Like it? Buy the album on Amazon.com