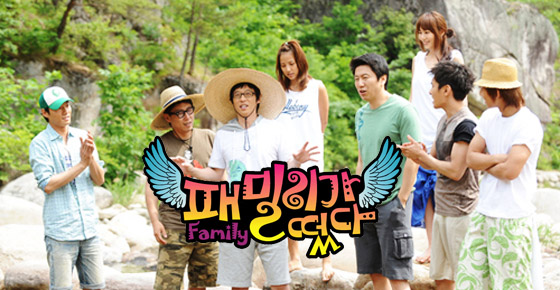 The thing about that saying is that you have the notion that people don’t get along with their families, but what if you do? After all, the relationship you’ve got with family should be closer than the one you’ve got with friends, unless that friend feels already like “family”.

So what do you get when you put a bunch of celebrities together and make them act as if they were family? You get Family Outing, a Korean variety program primarily hosted by one of South Korea’s most popular comedians, Yoo Jaesuk, alongside pop singer Lee Hyori, pop singer Kim Jong Kook, singer songwriter Yoon Jong Shin, actor Kim Sooro, and current pop idol Kang Daesung from Big Bang. On the latest episodes they are joined by “the new family members”: actress Park Siyeon, and actor Park Haejin, who are replacing actress Park Yejin and actor Lee Chunhee on the show.

What is it about this program that works? There is this notion that celebrities are cool and glamorous, but then they try to sell themselves like they’re just like us. On this show, however, Korea’s idols ditch their cool and glamor for home-styled and good-natured entertainment when together, alongside a celebrity guest, they visit a random Korean town and take care of the owner’s house while they’re off on vacation. The Family sets out to complete a task list while playing games and competing for points to avoid chores that go from feeding cows, fishing, to catching sea creatures, harvesting rice, etc. Despite the fun of those crazy games and competitions, the best part of the show is when they finally sit down for a good meal together as Family.

It is so hard to imagine an American celebrity that would allow himself or herself be in this type of show for fear of looking like anything but cool. Member Daesung always points out how his manager would be against him looking like a dork or a bit silly on the show, which proves to be popular with fans. There’s also Lee Hyori, who on stage often performs provocative numbers on par with any American pop princess, but shows up in slacks, t-shirts and very little makeup on for the program.

All of them perform and make endorsements, which probably means they make good money, yet you see them being thrown into muddy waters as they play games while trying to catch fishes, catching wild chickens for dinner, catching sea creatures like octopuses, squids, and the rare flounder or angler fish. They harvest rice and dig for some potatoes, try to find ginseng and dig out radishes. They struggle to get their freshly caught food on the cooking table, they cut and chop, they simmer and get excited about meat, they taste and continue to make delicious-looking food.

That’s the closest family. The one that jokes around, fights over the last piece of meat, and call themselves names, but leaves everything in the past when it’s mealtime.

More Reality TV – if there should be any – should be like this.