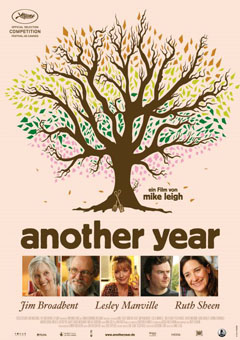 Mike Leigh always brings to the table these depressing film subjects in a way that it doesn’t make you think about it, until you’re done watching it. Such is the case with Another Year, a film about a group of people that are going through a very important year in their lives.

Lesley Manville plays Mary, an older woman who’s had a failed marriage and a subsequent failed relationship, so she spends her days drinking, and scouting bars for men, and works as an assistant/secretary at the help clinic she works at. Mary is friends with Gerri (Sheen), one of the psychologist there. Gerri is married to Tom (Broadbent), and they have a son named Joe (Maltman).

Another Year is a very draining film — and I mean this in the most positive way, it almost hurts to see Mary on screen groveling for a bit of love and attention. However, it’s so hard to sympathize with her as a character, and at the same time you can’t help but to keep on looking. Mary is really a pitiful character, never been truly loved, and never has been able to love herself. She’s one of those people that needs outer assurance to feel content within themselves.

Mary crosses the line time and time again, until the glass is full and the liquid is spilling. It’s only due to Manville that we can still connect to her character. And it’s not only her, it’s also the rest of the cast and their characters… they are all full of gray areas, and Mike Leigh’s script makes for a very VERY interesting character study… even if you don’t like these characters, if you think you can’t connect, these are really interesting “people.”

There are a few awkward laughs here and there, but not enough to label this a comedy or a dramedy — that’s to you, IMDb. It’s those laughs when something really upsetting has happened… like a murder or a rape, and you make this really inappropriate comment to ease that tension, but only make it worse. That kind of comedy. It’s very real.

A lot of people might get turned off by what the story is about, its tone… but if you’re down with drama, Another Year is for you.