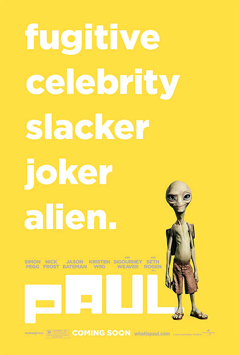 I didn’t think I would actually enjoy a film in which Seth Rogen is heavily involved, but Nick Frost and Simon Pegg — both famous for Shaun of the Dead and Hot Fuzz — managed to make that happen in Paul.

Set in 2009, Paul follows British nerds Graeme Willy (Pegg) and Clive Gollings (Frost) in their trip to the US. They are going to attend the annual Comic-Con convention in San Diego and visit important extraterrestrial-related sites in the States. On the road, they investigate a car accident and discover an alien called Paul (voiced by Seth Rogen). Despite the nerds being shocked at Paul’s appearance, the alien convinces them to help him reach his mothership.

The ride isn’t an easy task for the group. They have to evade federal agents (played by Bateman, Lo Truglio and Hader) and kidnap a religious girl called Ruth (Wiig) to avoid revealing information about Paul.

Directed by Greg Mottola (Superbad), Paul definitely feels like it was made for geeks and nerds. There’s a good amount of sci-fi references ranging from the Mos Eisley Cantina theme from A New Hope up to Close Encounters of the Third Kind, guest cameos and more that will easily appeal to sci-fi fans.

The cast in Paul is great. Nick Frost and Simon Pegg have good chemistry as the pair of British nerds. Seth Rogen, an actor who I find annoying for the most part, was a lot less annoying than in his previous films, even providing some tenderness to the foul-mouthed alien he voiced. Kristen Wiig helped speed up the pace of the film — it is kind of slow before her character appears. She manages to steal the show with her character changing from a Bible toting saint  to someone eager to sin. The feds, played by Jason Bateman, Bill Hader and Joe Lo Truglio, were funny to watch. The small screentime that Jane Lynch, Jeffrey Tambor and Sigourney Weaver employ was amusing, with Weaver standing out.

Sure one could say that Paul may not be one of the best efforts from Pegg and Frost — I wish there was a different director instead of Mottola — but the movie itself is enjoyable and fun to watch thanks to the script and chemistry among the entire cast.