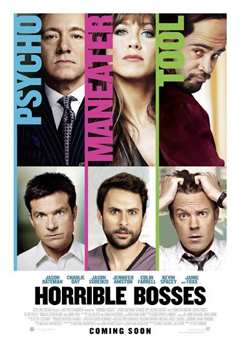 Have you ever fantasized the idea of wanting to kill your boss from work because he or she is an unbearable asshole? Horrible Bosses explores that idea through Nick (Bateman), Dale (Day) and Kurt (Sudeikis) – three friends who aren’t having a good time on their jobs thanks to their despisable bosses.

Nick works at a financial firm where his boss Dave Harkin (Spacey) abuses Nick most of the time. But Nick puts up with it in hopes of getting a promotion. Instead, he gets blackmailed by his “total fucking asshole” of a boss and is chained to his work.

Dale works as an dental assistant for Dr. Julia Harris (Aniston), who constantly harrases Dale sexually to the point where he wants to quit his job – he’s engaged to Stacy (Sloane) and loves her. But Julia is aware of Dale being on the sexual offenders list, so Dale is pretty much screwed and has to stay working for his “crazy evil bitch” of a boss. Even worse for Dale, he doesn’t get much sympathy from his friends because his boss is hot and they think he should bang her.

As opposed to Nick and Dale, Kurt actually enjoys his job at an industrial company and loves his boss Jack Pellitt (Sutherland), despite Jack’s son Bobby (Farrell) working there. But when Jack dies of a heart attack, his “dipshit cokehead son” Bobby takes over the company and makes life miserable for Kurt as well as the other employees.

The three friends eventually agree to the idea of murdering their bosses. With the aid of Dean “Motherfucker” Jones (Foxx) as their murder consultant, they start to work on the killings, but not everything goes according to plan.

Horrible Bosses is actually fun not only because of the jokes and unplanned twists happening to the characters, but all the actors here are well casted and play off each other very well. I had some doubt with Jennifer Aniston being part of the film at first, but she actually steps out of her comfort zone (e.g. Just Go With It) very well. Colin Farrell and Kevin Spacey play very well the evil bosses role, but I wished we could have seen more from Farrell since he had the potential to portray a much bigger asshole than Spacey and Aniston combined.

The shining star of the film is easily Charlie Day, best known for It’s Always Sunny in Philadelphia, as he provides most of the laughs and his comedic timing is solid throughout the entire film, enhanced a lot by a high-pitched voice. Another performance to notice here is Jamie Foxx, who manages to shine despite having little screentime and you can tell he had fun with his role.

For a Rated-R comedy, this could have been darker, work the premise of killing your boss better and used more of Colin Farrell’s “bad boy” image. Jason Sudeikis could have been replaced easily by the likes of Vince Vaughn or Bradley Cooper, as I found him to be the least amusing among the main characters – he was good, but not great. Still, Horrible Bosses is entertaining and worth the watch because of Charlie Day.