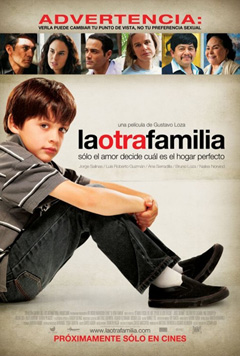 I actually have really mixed feelings about La Otra Familia — the other family — because, though in parts it worked great, there were moments and aspects of the film that just didn’t feel right.

The film tells the story of a boy named Hendrix (Loza), who is constantly abandoned by his addicted mother, Nina (Norvind) — she has just recently neglected him for the past three days. Listening to the pleas of the child asking for his mother, the neighbor intervenes and calls a “friend” of Nina, Ivana (Serradilla), who ends up taking the child for the time being.

Because Nina is planning a trip with her partner in the following weeks, she decides to leave Hendrix with her brother Jean Paul (Salinas) and his partner Chema (Guzman), while they wait for Hendrix’s mom to get clean.

La Otra Familia is presented as a drama about couples and family that ends up being more. Its first layer is a contrast between this composed couple of gay men who don’t really want to get attached to the child, against a mother who can barely keep her things together.

The film also shows how things that sometimes are familiar to us can make people uneasy in a comical way, like when maid Doña Chuy (the awesome Carmen Salinas) and gardener Gabino (Palacios) — who have worked for like… forever for Jean Paul and Chema — have dirty thoughts about what Hendrix is doing at their bosses’ house. Their minds inundated with what they had heard about gay men (or people) from their surroundings. Fearful Gabino takes Hendrix out to see some Mexican wrestling so Hendrix becomes more macho and doesn’t catch “the gay”, while Doña Chuy talks to the priest about her doubts. Society laid out plainly for us to see.

However, La Otra Familia is much more than just another LGBT film, even though it has a lot of LGBT characters like Ivana, who’s trying to get pregnant with Gloria (Soler), who suffers a breakdown when her sperm donor — who happens to be Ivana’s other gay brother (how many gay kids can one have?) — George (Mendez) backs down. No, the film is about this kid from a troubled home, and how the system doesn’t work because society doesn’t.

In a horrible HORRIBLE turn of events, we see how awful society gets and how both men are accused of kidnapping and abusing Hendrix — due to one of the subplots that includes a heterosexual couple (one of them Dominika Paleta, whose face looks exactly like her sister’s… Ludwika Paleta, Maria Joaquina from Carrusel — whose dad, Zbigniew Paleta, scores the film) and a nasty friend of Hendrix’s mother.

Like I said, La Otra Familia is all these great things, but sometimes it gets too clustered. The fade to black transitions almost kill the continuation of the film, making you feel a piece is missing, while sometimes the musical segments got in the way of the story to remind you of MTV. The acting for the most part was strong, with a bit of overacting sprinkled here and there, while little Bruno — in his first starring role — was a bit wooden in his “most cute scenes”, but was all natural at the Mexican wrestling match.

In the end, if you begin watching the film and judge these characters as if you were Doña Chuy or Gabino, you will go through their characters’ arcs and probably change — at least, slightly — your point of view of gay people and start seeing them as people. You will find that Jean Paul and Chema are not “the other family” but just another family.