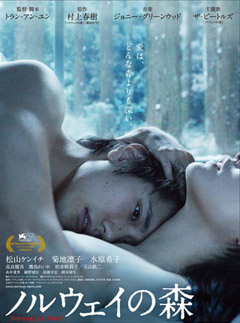 Based on the much beloved novel by Haruki Murakami, Norwegian Wood is the story of Watanabe and Naoko (Kenichi Matsuyama and Rinko Kikuchi). The common bond between them is Kizuki (Kengo Kora), Watanabe’s best friend and Naoko’s first boyfriend.

Not long after our story begins, Kizuki kills himself, leaving both of these young souls broken and confused. Timidly, they both find solace in one another…but even that is fleeting as Kizuki cannot handle it all, and retreats to a sanatorium outside of Kyoto.

Watanabe’s heart belongs to her, regardless of how near or far she is. The heart however, is not without temptation, which is where spritely young Midori comes in. Despite being involved with another man, she takes a shining to Watanabe. They share an uneasy relationship: she seemingly screwing with him for her own amusement, he trying to numb the pain of being without the one he loves.

Sounds great doesn’t it? Well it is… if you read all of that in the book. Where the movie is concerned, it all gets overwrought with some perplexing direction. Maddeningly, it is the same mistake over and over. You see, this is primarily a very sad tale and the film doesn’t want you to miss that point. In fact, they are so sure you’ll miss these moments of profound sadness, they’ve gone through the trouble of underlining every one of them with a blaring, obtrusive, melodramatic score. This is such a shame, because the film is so beautiful to look at and contains some very moving performances.

It pains me to not be able to recommend this film, especially since it was *this* close to being a truly bittersweet experience. But those heavy-handed cues are just too much to ignore, and shook me out of the story like a ringing cellphone.