Memoirs of a Teenage Amnesiac 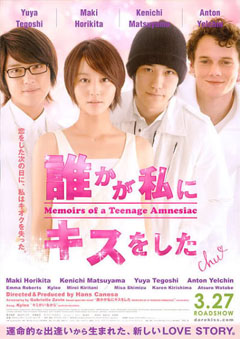 Memoirs of a Teenage Amnesiac, or Dareka ga Watashi ni KISU o Shita (literally translated to Someone Kissed Me), is the adaptation of the Japanese novel by Gabrielle Zevin of the same name. It stars popular Japanese actor/idol Horikita Maki as the lead Naomi Sukuse (in the book Naomi Porter) who falls down the stairs, hits her head and loses the memories she’s collected for the past four years, including her best friend Mirai Hasegawa (in the book Will), played by idol Yuya Tegoshi from boy band NEWS, and her American boyfriend Ace Zuckerman, played by Anton Yelchin.

Gasp! Say what? Americans and Japanese young actors together in a Japanese film of an American book? Yes, that’s right. Because Teenage Amnesiac also includes actor Kenichi Matsuyama (recently seen in Norwegian Wood) and none other than the young Emma Roberts. So yeah, the roles have inverted. And how do American fans of the book feel about their beloved book being made in Japanese? Well, a lot of them aren’t happy about it… or at least, they weren’t happy about it. Talks about how “pointless” it is to change the setting or how not “into Japanese” they could be. Even though the one involved in the making of this was the book’s author herself, and it was probably done because the book was such a hit in the country.

Sure, it’s just internet talk. However, it reflects the sentiment of *insert nationality* whose film/book from their home country gets remade/adapted in English/not the language it’s supposed to be. So we do understand your sentiments, and here’s to hoping you guys understand when it happens the other way round again and again… and again.

As for the film… well, suffice to say that I feel too old to be watching this. Kenichi Matsuyama should feel too old for this too. I felt like the characters were Mary Sue’s or Marty Stus… or whatever the male form of a Mary Sue is. Surprisingly, in a bad way, Anton Yelchin is a bit of a jerk in here. He’s literally your typical American jock… only he plays tennis. Poor Naomi’s lost her memory, and all he can think of is getting laid for prom?

Naomi’s other suitors are the Martys Stus, one playing the best friend from the yearbook commission. Mirai is dorky, well-natured, cares for Naomi… and well, that’s just telling you straight in your face that he’s the one. Then there’s the dark, brooding opponent Yuji (Matsuyama), who rides a motorbike, works at a projection house where he watches foreign art house films, photographs Naomi for a play, and actively pursues her as she ends her relationship with Yelchin’s character. Yuji is what you know is bad, but you still want to see what’s going on with him. In a dark indie film, Naomi would have pursued Yuji and it would have ended badly. In a fairly mainstream drama, she pursued Yuji and ended up fixing him. This is a romantic drama for teenagers, so you do the math.

I don’t think I’ve ever seen Horikita Maki in anything else, but she seems like an average lead in here. And Emma Roberts is terribly underused in this.