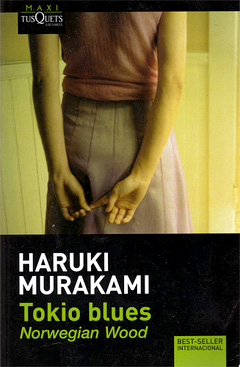 Norwegian Wood (or Tokio Blues, in Spanish) is already being adapted into a film with a possible release for Dec’10, so it wasn’t a stretch to think about actual people playing the characters in the book.

Just as the other Murakami novels, the story has that vibe of quiet sadness, a great soundtrack and a sense of great cinematography. The characters are often quiet and internalize everything. They are so real that you can’t help getting into someone else’s shoes and call someone a jerk or a bitch.

I had problems starting  the novel. I read the first two chapters fine, but lost something during the middle part that made it almost tedious to continue with it. However, I was over it once I read about Midori and how her developing relationship with Watanabe clashed with Watanabe’s feelings for Naoko… and then Reiko. As much as I wonder why these three end up sucked into the gravitational forces of Watanabe, and how I think that is somewhat sexist, I can’t help but want the best for him. And, in my opinion, that was with Hatsumi.

Get it on Amazon: Norwegian Wood | Tokio Blues