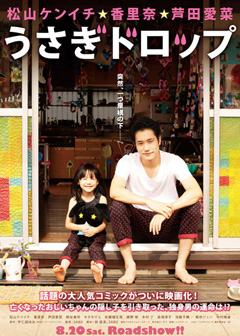 Based on the josei manga by Yumi Unita, Usagi Drop tells the story of 27-year-old Daikichi (Matsuyama), who ends up living with his grandfather’s 6-year-old illegitimate child, Rin (Ashida), after his passing.

Tired of his family treating the child as an outcast, Daikichi decides to bring her home with him, which ultimately gives a foreseeable outcome in his life as a single man. As time passes by, little Rin begins feeling more and more comfortable being around him, but still must face the loss of her father.

Lucky for us, Usagi Drop is an adaptation that doesn’t take into consideration the actual ending of the manga series [1], because that would be weird and a completely different movie. As it is now, the movie is a sweet little film with strong leads in Kenichi Matsuyama, who’s probably already established himself as one of the brightest young actors in Japan, alongside Mana Ashida.

If Korea has the Hallyu Wave [1], Japan has a whole wave named after Mana-chan.

There isn’t much conflict in the film, except for the family not really accepting Rin, but that seems to be quickly resolved. Though, for viewers that might have seen Mother, there’s a short scene involving Gou Ayano that might give you pause. In all honesty, it’s really hard to hate on this film because there’s nothing to actually hate about it. Acting is quite solid all around — a scene with Matsuyama and actress Atsuko Takahata comes to mind — and there’s a lot of light moments surrounding this drama.

There’s a building love interest in Yukari (Karina), the model who is the mother of Koki (Sato), who is a friend of Rin from school and also shares more than just a table with her. However, this interest goes nowhere because this isn’t really Daikichi’s story — it isn’t about him finding his path and having his own family. Usagi Drop is the story about a girl that feels like she doesn’t belong and ultimately finds a place to call home. Mana Ashida is up for that task. She holds herself on-screen as if she’s been born to do it, and compliments Matsuyama’s acting really well.

There’s a great sequence that illustrates Daikichi having to get used to his new morning routine, in which he runs across town to get Rin to school and runs back to get to the office. While running, Matsuyama had to carry Ashida a number of times and you can tell she can’t hold that million-dollar smile of hers.

In the end, Usagi Drop is a watchable piece of light drama that is elevated by the acting of the two leads. Let’s just hope they don’t continue making another one because, as an audience member, I wouldn’t be able to take it.