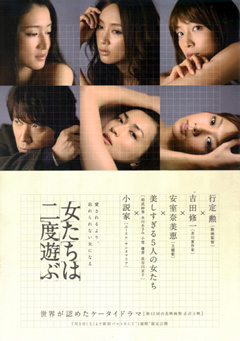 Onna-tachi wa Nido Asobu, or Women Play Twice, is the film cut from the BeeTV Mobile drama about five different women entwined by a writer with little imagination.

The five different stories were released on mobile phones in Japan in 5-minute parts in the course of a few months, which later turned into this film that was screened at a film festival in Taiwan. So in terms of technology, kudos to Women Play Twice.

However, if we take a look at the film in itself as just a film and focus on the story or the characters, there’s little to see. The story begins with a writer (Santamaria) at a cafe who is trying to write a story, but always ends up throwing away the pages he’s written. Until he overhears the conversation between two male friends sitting on the next table. The guy is telling his  friend about this girl (Saki Aibu) he’s met, she’d stayed with him, but wouldn’t leave.

The next day, the writer is having the same trouble writing, until he hears these two other males talking about how he’s doing better paying his debts after he decided to stop seeing a woman (Asami Mizukawa). Then there’s another pair of friends talking about how one met and had an encounter with — imaginary or not — this amazing (almost magical) older woman (Koyuki), and lastly the writer overhears the conversation between a guy (Takashi Tsukamoto) who’s had a chance encounter with an ex-girlfriend (Yuka).

Finally, the writer’s editor tells him he should finish writing about his own love life, as the writer tells his boss that his wife (Kyoko Hasegawa) is anything but interesting. He ends up having his own story to tell.

The biggest highlight in a rather disappointing film was Yuka playing Tsukamoto’s ex-girlfriend. Her character is vulnerable without being weak, practical without coming off as bitchy. The most grounded in real life of all these characters.

The biggest bloodsucking character was Asami Mizukawa’s… ugh — but I’m giving this a whole star for Yuka’s portrayal.