Haruki Murakami – South of the Border, West of the Sun 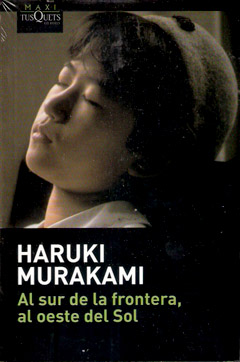 Al Sur de la Frontera, al Oeste del Sol tells the story of Hajime, who meets with a childhood friend he hasn’t seen in the last 25 years. Her name is Shimamoto, and Hajime is contemplating leaving his wife and daughters to be with her.

To be really honest, when I was reading 20-year-old Hajime, I felt I was reading myself. Except I’m not a dude. But I did feel that way. Actually, I could also relate with the fact that he was an only child. The way his head worked, his personality… it reminded me of me.

However, unlike Hajime, I think ahead. LOL — I really didn’t know whether to shout at him or roll my eyes when he began cheating on Izumi. But I’m also forced to admit that I was actually hoping he would get together with Shimamoto, and I actually had to stop reading the last two chapters because I was feeling his desperation. She is never coming back, and she’s trying to erase everything that will remind you of her.

I wanted to know what was up with Shimamoto. I was expecting a big revelation, instead I got a bucket of cold water.

Other than that reading experience? My moral compass tells me that Shimamoto was wrong, but as she explains, she couldn’t help herself. She had to see him and she had to talk to him. I wonder if the book would be as “popular” if it were written in the perspective of a woman going about her teens cheating on her boyfriend with his cousin, and then cheating on her husband with her childhood crush.

I love to hate or hate to love that last chapter on the emptiness.

Get it on Amazon: South of the Border… | Al Sur de la Frontera…