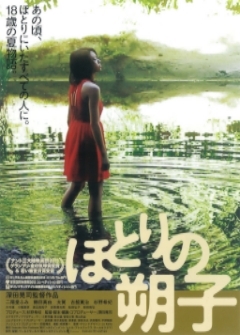 Au revoir l’été (Hotori no Sakuko) is a good, if somewhat surprising, example of the kind of low-key, human-scaled Japanese film that continues to be overlooked by foreign distributors and programmers alike, including those in N. America and Europe.  This isn’t a new phenomenon.  In the immediate postwar years and beyond, prepackaged spectacles of Japanese exoticism were preferred over anything else.  There’s a reason why a visually striking but otherwise wholly unremarkable movie like Gate of Hell (1953) has such a vaunted reputation.  More recently, it appears that everyone is on the lookout for the next Miike Takashi or Sono Sion.  These prolific auteurs have been doing their best, though, to keep the fans satisfied.

While it’s true that Japanese producers and cultural agencies can do more to promote films like this, the onus also falls on those in the position of power elsewhere, including, partly, the audience.  Unless you live in New York or Vancouver, if the film festival near you does feature a Japanese film, the chances are that it’ll be of the quirky/ultra-violent/surreal variety. That’s not to suggest that those films can’t be good—after all, many of the greatest Japanese movies ever made fall within those categories—but Kore’eda Hirokazu is not the only Japanese filmmaker currently making quietly immersive dramas.

What is especially disappointing about the relative lack of interest in Au revoir l’été so far is how instantly relatable it would be to arthouse audiences in the West.  From the title(s) on down, it channels the great Éric Rohmer, the master of the comedy of manners and romantic complications.  Although it doesn’t contain as much dialogue as Rohmer’s films, this deceptively simple effort sports a similarly breezy, off-handed vibe that has endeared audiences to a good portion of the French auteur’s work.  But like Rohmer, the true beauty of the film lies in the little details from which the larger picture is inferred.

The international title, which translates as “goodbye summer,” may remind viewers of Conte d’été (1996), better known as A Summer’s Tale, Rohmer’s third entry in his “Tales of Four Seasons” series [1].  But the film more strongly echoes the third installment of the director’s “Comedies and Proverbs” cycle [1], Pauline at the Beach (1983) (the Japanese title roughly translates as “Sakuko on the margin”).  Similar to the eponymous Pauline, Sakuko is, to borrow a Manny Farber term, the “eternal sideliner,” quietly observing the foibles of adults and the adult world around her.  She is wonderfully played by Nikaidô Fumi, a gifted young actor whose large, curious eyes serve as effective conduits.

Structured in a diaristic manner—echoing Rohmer’s The Green Ray (1986), not to mention a number of movies by Rohmer’s S. Korean acolyte, Hong Sang-soo—the film opens with 18-year-old Sakuko traveling with her step-aunt, Mikie (Tsuruta), to a vacation spot during the summer.  It turns out to be the sleepy seaside town they hail from. Sakuko, who has failed her university entrance exams, needs to study for a retake.  Mikie, an international development researcher, is ostensibly there to finish some translation work.  Neither of them will accomplish too much over the next few days.

Besides the beautiful weather and scenery, there are other distractions in the form of a hotel manager, Ukichi (Furutachi), who was once in a relationship with Mikie’s sister whose house is currently being occupied by the duo while she’s in Europe; his downcast teenaged nephew, Takashi (Taiga), a one-time Fukushima resident; his temperamental daughter, Tatsuko (Sugino, also the film’s co-producer); not to mention a visiting university professor (Otake) currently having an affair with Mikie.  For the most part, these characters are well sketched out, and the webs of relationships that form and evolve during the course of the film do so at a natural pace.

As in Rohmer, however, there are misunderstandings and deceptions abound.  Ukichi, supposedly a reformed low-level criminal, has covertly turned his inn into a “love hotel” [1] for local politicians and is illegally employing Takashi on a part-time basis.  Sakuko learns from Takashi that the step-aunt Ukichi was once involved with was actually Mikie.  Tatsuko does what she can to get back at her father, including sleeping with the duplicitous married professor.  And Takashi ends up falling for a student activist (Koshino) who is only interested in him because of his Fukushima past.

Director Fukada Kôji, best known for another French titled film, Hospitalité (2010), a broad, intermittently engaging satire on Japanese xenophobia that was similarly co-produced by the Zainichi Korean [1] Sugino, is more successful here in commenting on the ethnocentric tendencies of his countrymen.  When Sakuko questions Mikie about her research on Indonesia and whether a local would be much better suited to perform such a task, she responds by how an outsider’s perspective can reveal new and unique insights, which is essentially what Sakuko had been unwittingly up to while in town.

Speaking of unique, Fukada employs the seldom-used 4:3 aspect ratio [1], again a Rohmer specialty, with his plethora of discreetly rendered medium-shot compositions in natural lighting only further enhancing the connection to the French master’s self-effacingly beautiful mise-en-scène.  The traveling-shots, however, bring to mind the work of classical-era Japanese filmmakers such as Naruse Mikio and Shimizu Hiroshi.

The lone striking, highly metaphorical image in this delicate coming-of-age story has Sakuko stepping into the water under a canopy of low-hanging trees whose reflection in the ensuing ripples cause a surreal, otherworldly glow.  The vision leaves her partner stunned for a moment.  Sakuko’s understanding of self and others will be more gradual.