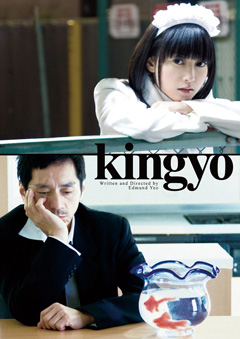 A woman is working the streets of Akihabara looking for a gig as a “Maid Tour” guide, as her phone rings and meets up with a man, whom she used to know.

Kingyo — “goldfish” in Japanese — is the short film by Malaysian director Edmund Yeo with a Japanese cast and crew. It’s presented as a split screen for both of the main characters that’s well handled to show the distance between these people, as well as showing what’s going on inside their minds.

The pace of the film is slow, and contemplative. The handheld camera and the warm hues of city lights give the gloomy story of two ex-lovers finally parting.

The main character is interesting because he’s not your typical cheating husband, and we never victimize any of the women in his life, even if we could at the beginning of the film. His development is gradual, as we see his wife in flashbacks taking care of a couple of goldfishes, and we accept his final deed as a way to close that chapter of his life.

We are also never angry with the “other woman,” as she herself decides to move on… twice. Kingyo never ends like a bittersweet tale, instead it ends as a special new beginning.