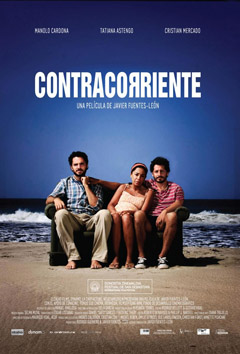 Selected by Peru to represent them at the upcoming Academy Awards, Undertow tells the story of Miguel (Cristian Mercado), a fisherman in the small town of Cabo Blanco, where he is having a baby with his wife Mariela (Tatiana Astengo). The model citizen, a good husband, and well-liked by everyone in town, no one knows that Miguel is having an extramarital affair with Santiago (Manolo Cardona), an artist who’s visited the place since he can remember.

As the melodrama unfolds, writer/director Javier Fuentes Leon doesn’t really take us anywhere we’ve never been before — if you’ve seen many LGBT-themed films that is, except with that bit with Santiago’s destiny, where the Magic Realism finally kicks in. Comparisons with Brokeback Mountain seem to be inevitable, since they are both dealing with a “gay” theme in a setting not usually linked to “gay behavior” and they both have to deal with extramarital affairs, but they are little alike. Ultimately, the film is just a love story, which on one side makes you wonder how well the story would be received if it didn’t have a gay relationship at its core, and on the other side you’re presented with a gay relationship that’s as normal as any heterosexual one.

The acting is strong by the three lead actors, being able to carry the whole film in its 100 minutes of running time. The strongest moment in the film was perhaps better condensed in the song by Celso Piña featuring Cafe Tacuba, Aunque No Sea Conmigo, used in the trailer and the film for the line, “Quiero que seas feliz, aunque no se conmigo” (I want you to be happy, even if it’s not with me).

Visually, the film delivers some haunting scenes — I still believe Ricardo de Montreuil (La Mujer de mi Hermano, Mancora) is visually better in his work with his advantage work on some very high profile music videos in Latin America… so how about a collaboration, guys?