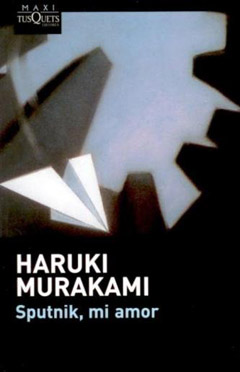 Otherwise known as SUPU-TONIKU no Koibito, Sputnik, mi Amor, or Sputnik Sweetheart, it tells the story of three people: the narrator, a primary school teacher who is in love with Sumire — a young woman trying to become a novelist — who falls in love with a married older woman named Myu, who is unable to love her back.

As with any Murakami work, the feel of loneliness is so well presented, the characters are interesting, and you can’t help but want to learn more about them. However, as with most of the Murakami stories I have read, there’s also that bizarre atmosphere that I always feel takes away. In Sputnik, it’s how Sumire just disappears, but doesn’t really disappear… and perhaps, Myu’s out of body experience.

I am not sure if I feel moved by Sputnik, but if I had to choose one of Murakami’s works, I would have to say South of the Border, West of the Sun is the title that has left me the most shaken.

Get it on Amazon: Sputnik Sweetheart | Sputnik, mi Amor