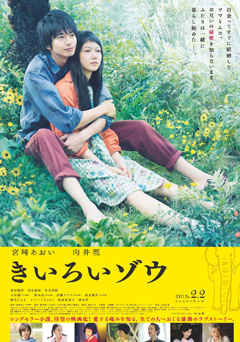 Aiko Tsumari, aka. Tsuma (Miyazaki), and Ayumu Muko (Mukai) are a married couple in a small town in the middle of nowhere. He’s a novelists with a part-time job as a caretaker in the local nursery home while she’s a housewife with a faint heart… that sees the world from a different perspective. Tsuma speaks to things that wouldn’t normally speak: the homeless dog Kanyu (Sakura Ando), their house goat (Tasuku Emoto), spiders, the rain (Kengo Kora), and the palm tree in her yard called Sotetsu (Ren Osugi) who accompanies Tsuma on heavy nights of a yellow full moon.

Yes, yes- it’s another slow-paced Japanese movie until Muko receives a letter with no sender that his tranquil marriage begins to show its fragile cracks.

Yellow Elephant seems to travel the fine line of whimsical character quirks and sad drama that Miranda July was incapable of balancing in The Future — though it does help that Aoi Miyazaki is ten times the more experienced actress that July is, despite being years apart in age. While both films tackle different subject matters — since Yellow Elephant is a lot more straightforward with its themes on marriage, maturity and companionship — both films share elements that include talking animals to voice character traits and pains. Tsuma and Muko are at one point endearing, they are hurt, they struggle with money, feel lonely and feel real.

Of course, the problem with the film is that… it feels like any other Japanese film that’s been released over the past five years. A somewhat sentimental story of a rather peaceful nature that lacks a grand incident- it rather focuses on introspective problems and aided by a varied list of sensible supporting characters. In the case of Kiiroi ZOU, there’s the dirty-mouthed Arechi (Emoto), his Milo-loving wife Seika (Matsubara), the boy-next-door in love with Tsuma, Daichi (Hamada), and his unrequited friend ‘Jenny’ (Asami).

Aoi Miyazaki takes over most of the attention in the film from the get-go as she skedaddles out of the bathroom — her nakedness disguised with regular frames– lamenting the death of a little crab that had dared to ventured into her steaming hot bath. She’s nonchalantly heartbroken and emotionally battered without ever bursting into overacting. The same can’t be said of Mukai Osamu, whose lack of range in this case showed a lot more, especially during the scenes that were focused solely on his character.

I liked the scenes between Miyazaki and the palm tree the most.