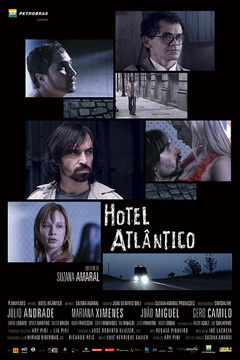 Hotel Atlantico tells the story of an actor (Julio Andrade) – referred to as The Artist – who finds himself without a job. He decides to embark on an aimless adventure, where he meets people and gets himself in unexpected, and even absurd, situations.

Funniest thing is, all the supporting characters are probably more memorable than the protagonist himself. From the sacristan (Gero Camilo from Carandiru) and his aid, to Diana (Mariana Ximenes), the daughter of the doctor who wanted to be major. Though, Andrade had moments where he could have looked like the protagonist in Jesus Christ Superstar.

Perhaps, the most absurd of situations is how The Artist ends up in the hospital, and his meeting with Diana who happened to recognize him when he needed aid. But the most moving encounter is when he meets Sebastian — or Sebastião (João Miguel).