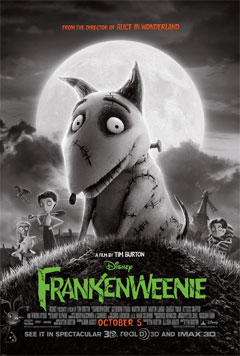 This hasn’t been a good year for Tim Burton, both of his movies underperformed, for Tim Burton movies that is, and while Dark Shadows wasn’t that good, this Frankenstein homage/parody deserves better. The reason? Frankenweenie is what one expects when they go watch a Tim Burton movie, and it’s, in fact, his best movie of recent years.

Frankenweenie might be Frankenstein for/with creepy kids, but it’s about a boy and his dog. Sparky the dog is not only Victor Frankenstein’s (Tahan) main star in his homemade movies, he’s also his only friend. But one day, tragedy strikes and Victor is left without his faithful companion. In the depressing day that follows, Victor sees a glimmer of hope when his science teacher, Mr. Rzykruski (Landau), talks about (and shows) the effect of electricity on a dead body. The proverbial light bulb clicks on, and Victor decides to resurrect Sparky. The result is bittersweet. Sparky and Victor are reunited, but it cannot be as it was since Victor has to hide him. And when other classmates find out about it, things take a turn to the worse.

Frankenweenie is a remake of a short film he did back in 1984, before he was famous and known for his dark and quirky style. Only this time it’s bigger and better, complete with great stop-motion animation and design, and music by Danny Elfman. But you can tell that he based Victor Frankenstein on himself as a child, a thoughtful kid who loves making stop-motion movies in his backyard. Even the fact that Mr. Frankenstein (Short) wanted Victor to play some baseball might be based on the fact that Burton’s own father was a minor league baseball player and maybe wanted Burton to play too.

And besides the obvious Frankenstein elements to the story, there are also references to the cinema Burton enjoys. Mr. Rzykruski, the inspiring teacher who speaks in a thick accent, clearly resembles Vincent Price. Victor’s parents spend time together watching Horror of Dracula. The mayor Mr. Bergermeister (also voiced by Short) not only has his name inspired by Santa Claus is Comin’ to Town’s Burgermeister Meisterburger, he resembles him a little.

Curiously, it was the kids, Victor’s classmates, who got the greatest designs, with one of them clearly resembling the Frankenstein’s monster with his big flat head and another, the classic hunchback assistant that’s even called Edgar “E” Gore (Shaffer). We also had the creepiest girl in town, creepy cat included, who is appropriately called Weird Girl (O’Hara). On the other hand, we have Elsa Van Helsing (Ryder), who is also Victor’s kind next door neighboor and vague crush, and the owner of Sparky’s crush; Elsa looks like what I imagine Edward Scissorhands and Kim’s daughter would look like… not that I imagine that kind of thing. Victor himself reminds me of another Victor, the one from The Corpse Bride. And Sparky, revived pet or not, is the cutest pet around.

As you see, Frankenweenie works because it is about the things Tim Burton knows and loves, and it’s the core of what Tim Burton is.