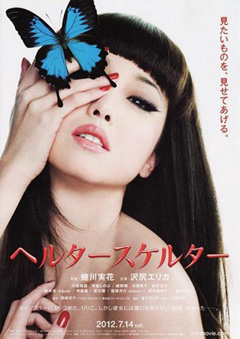 Mika Ninagawa’ second feature went hand by hand with Sawajiri Erika’s return to the spotlight after a five-year absence (unthinkable in the world they’ve crafted in Helter Skelter), but the most interesting aspect is its source material. And if I’m to trust some of the people that have commented on the project, I’m supposed to be getting a copy of the Okazaki manga as soon as possible.

The story is a study on celebrity culture and all the ugly going-ons that we rarely hear about. In here we follow Lilico (Sawajiri), a top-of-the-line manufactured idol that’s so well-placed in the market, that she’s the talk of the town- but unlike people who complain about their privacy, she savors these moments and lives for them. She is the image of perfection, but when the cameras turn off, she unravels. She mistreats her assistant Hada (Terajima), who also has her own demons, has unabashed sex on set with a bad boy (Kubozuka), and at home, she marvels at her own shrine filled with pictures of herself as she flips through the many magazine covers she’s done.

However, all of this is an illusion. Lilico (and her management, played by her Mama-san (Momoi)) has her secrets, deep buried within all that plastic surgery that’s threatening to kill her. The subject matter in Helter Skelter is, of course, delicious. As outrageous as it seemed at times, this dirty world of backstabbing, where the common thing is to take advantage of people and deceive them to get ahead, and as younger and more vibrant competition turns up every single day of your career, is pretty real.

The problem seems to lie with the film adaptation, which never seems to find a solid pace. Sometimes it seems to be a psychedelic drama on acid, reminiscent of the trippy ride on Tetsuya Nakashima’s Memories of Matsuko, but unlike that film, Ninagawa’s vision seems to overtake Helter Skelter instead of enhancing  the jumpy screenplay. I never truly felt that Nao Omori and Anne Suzuki’s detective story was connected in the film, not in narrative nor style.

The acting in the film was decent — I wasn’t expecting on seeing Sawajiri nude, so that made for some awkward watching — with stand-outs from Shinobu Terajima, playing the insecure Lilico assistant who could make or break the idol she lived for, as well as Kiko Mizuhara (Norwegian Wood) as Lilico’s rookie competitor and her brutally honest demeanor especially nearing the end of the film. Was the end of the film a sinister one?

While Helter Skelter works solely as a hyper-realist drama that takes a look not only within the celebrity machinese but society and how the media can build or tear something down, it does contain crime elements (that I don’t think fully work) as well as some fantasy and horror tones, but I don’t think they’re enough to warrant those tags. But I’m for certain gonna get hold of the manga now.