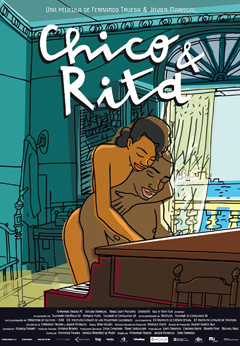 I’m taking the liberty to tag Chico & Rita with our Cuba tag because you gotta love Cuban music and culture to fully love this film. It adds that extra something special to the film, I think.

As a young piano player in 1940s La Havana in search of the perfect voice to match his playing skills, Chico hears the sound of Rita’s voice at a bar when he’s about to use his charm alongside pal Ramon (Guerra) to bed two American women.

Enchanted by the magic in Rita’s voice and allure, Chico tries to convince her that they’re meant for each other — musically and more. Rita is hard to get, but her feistiness isn’t a match to Chico’s charm and they end up sleeping together. Up the next morning, in animated naked bliss, Chico is inspired to compose the melody for his song, which he obviously entitles “Rita.”

Chico & Rita is a chronicle of long lost love. The couple’s relationship is a roller-coaster of emotions as Rita falls madly in love with Chico to then storm out of the room swearing she’d never want to see him ever again. Chico then tries to win her over, they make beautiful music together to start the cycle once again. It’s Latin passion at its best in a Spain/UK co-production! Surprising, huh?

Anyone expecting a bit of insight on today’s Cuba and Fidel are out of luck — the revolution is but a passing mention in the film. But Chico & Rita does get a bit of a commentary once Rita ends up in New York as a movie star, or more specifically a second-class movie star when the film reaches its climax.

The style of the film is handled by Spanish designer Javier Mariscal [1], who’s famous for the 1992 Barcelona Olympic Mascot Cobi (La Mascota Mas Genial [1]). The production recreated 1940s La Havana by visiting Cuba — leaving the city almost unchanged — and taking a look at the extensive photographic archive of the era. They shot live action for four weeks to be able to give the animators [1] the right material for the characters and the story. The result is full of soul.

The music is full of flavor, handled by Cuban pianist Bebo Valdes who’s worked with director Trueba before in Calle 54. You can never listen to renditions of Besame Mucho [1] and Sabor a Mi [1] enough in one lifetime. The music, of course, is a central part of Chico & Rita, chronicling the evolution of Cuban music into what we know as Jazz, later evolving into Latin Jazz.

Except for Winnie the Pooh, I had really lost hope with this year’s animated films — sorry, Rango didn’t quite cut it for me. I hope Chico & Rita gets a chance for, at least, an Academy Award nomination. Though, it should really win because it’s really about time audiences stop seeing animation as films for children and start seeing it as just a medium.