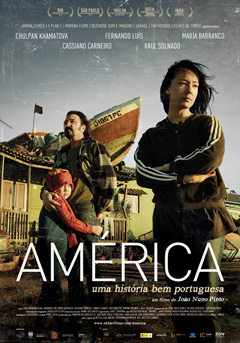 Following the life of Liza (Khamatova), a Russian immigrant in Portugal who lives by the (not so idyllic) beach with Vitor (Luis), a small-time Portuguese crook who makes a living out of stealing things from old ladies, until his friend Paulo (Branco) suggests they get into the fake-passport-selling business since Cova do Vapor is ridden with illegal immigrants waiting to get a new identity.

The guys get in touch with Melo (Solnado) in charge of the graphical elements of the fake passports, the stoner Matias (Carneiro), Tolentino (Maestre) in charge of getting the clients, and the Andalusian Spaniard Fernanda (Barranco) who is the leader and ex-wife of Vitor. To say the least, working with your ex is never a good idea.

Personality clashes and some very dark humor play a part in this ironic drama. Personal feelings aside (I once got my useless passport stolen), it was an interesting film to watch despite the confusion of the beginning, when I had a bit of a language clash between Russian and Portuguese being spoken- it’s just not normally two languages I see together much. I was actually really surprised that Khamatova spoke so much Portuguese. Her character is a truly tragic comedic heroine, and she made me feel bad throughout the whole thing. While I enjoyed her relationship with Liza’s grandmother (or mother or mother-in-law?), I never really got the feeling that the relationship with Liza’s son (Custodia) was THAT important. I mean, the bond between mother and child seems to be a given, but I didn’t really feel it on screen, so by the end of America I was just really rooting for her to escape.

What makes the film is some of the most random moments — they aren’t a match to dropping a cow from the sky like in Luna Papa – but they are pretty darn funny, even if totally inappropriate. One of the comments we made was during a scene in which Liza’s kid was playing with the gun, and we thought he was going to have an accident which prompted a very bizarre and awkward laugh. See! It’s very dark. And there’s a boat (look at the poster) that falls during a terrible storm in the middle of the night… and it’s funny. I understand why this might be labeled as a comedy on IMDb, but it doesn’t entirely feel appropriate.

Of course, amidst all the chaos there is some form of love/lust that blooms between Liza and an Ukranian immigrant, Andrei (Evlanov), that gives us this funny scary dialog that involves Liza’s suggestion for killing all these people that she hates, and Andrei swiftly agrees to it, sending nervous chuckles and a few shivers down your spine. Since my immersion in Russian film, I’ve always found their sense of humor extra dark, even in things like The Land of the Deaf. It’s a mix of self-deprecation with a dash of danger that I’m not quite used to yet.

Despite the happy ending… it didn’t feel quite satisfying, though. Maybe because I really quite hated most of the characters.