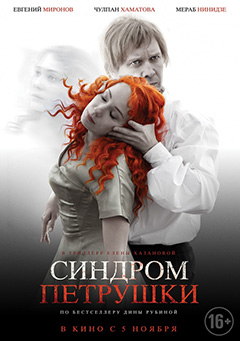 I’ve never gotten the chance to review a Russian film during its opening weekend, but given the chance to check out Chulpan Khamatova’s return to the big screen in a rather heftier role than her brief appearance in Under the Electric Clouds was definitely something I couldn’t miss, especially considering how much of her work I’ve been able to wing without subtitles.

Based on the novel by Dina Rubina of the same name (at least in Russian), The Puppet Syndrome (or Sindrom Petrushki) tells the story of Peter in three distinct timelines— first as a boy (played by child actor Artyom Fadeev) who becomes obsessed with a fiery-red-haired baby girl he encounters (and kidnaps) in the street. As luck will have it, this boy and girl, named Lisa (Olesya Galinskaya), form a strange bond through Peter’s love of puppets and her willingness to be at his disposal; they become friends through their teenage years (played by Alexander Kuznetsov and Alina Gvasaliya); and their seemingly perfect, according to longtime friend Bobby (Ninidze), but tumultuous adult relationship (Mironov and Khamatova).

The story explores Peter’s obsession with marionettes very early on when we witness the death of a fiery-red-haired woman, who obviously has to be related to Lisa, and how the relationship of his parents may have clouded his view on what a healthy relationship is. The scenes as children are rather straightforward, and they grow more complicated during a confrontation with Lisa’s father, which sheds a bit of light on her complacent nature. Nothing seems to be a major incident, until Lisa’s sanity begins to unravel after the loss of their child and Peter’s building a real-life-sized doll of her.

Hazanov manages to weave into a gypsy tale that may explain her heroine’s tragic family line, her incandescent hair and doll-like complexion, which give the film’s its best touch with beautiful carved wooden puppets. These can give a film a somber mood if given a darker “gothic” or “grungier” look, but the oranges and green shades that permeates the color palette give it a more whimsical feel. The Puppet Syndrome is also part stage performance as we see Peter treating Lisa and Lisa’s doll as emotionless rag dolls he can move and position as he pleases, until that final performance that bursts the illusion and hits all the right points with Khamatova’s monologue, which had build up from the moment she began therapy with the most unethical psychologist– their friend Bobby.

However, after all this turmoil, I don’t feel like I know Peter and Lisa enough, especially considering their resolution. The film is just a little bit over 1hr30, so the character build up with the other actors seemed rushed and the editing a bit choppy, but it finds its pacing once you focus on their grown-up versions, except when Ninidze is involved, as he seems largely misused. I ended the film wanting to read the novel, though. That’s successful, no? Is an English translation available?

Good enough to climb to the Top5 of Khamatova’s filmography~ Now, let’s not wait another seven years to give her another meaty role.