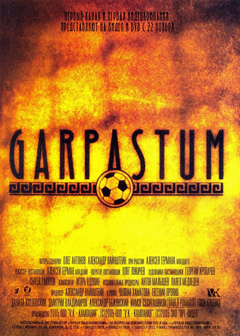 Garpastum (with the stress in the “pas” syllable) is a film of mixed elements — it’s a war movie without war, a slow-paced drama exploring the boyhood of a group of friends who live for football (soccer) in 1914, in the eve of World War I.

The film begins with the assassination of Franz Ferdinand, the culmination of the World War I build-up, and the nonchalant lives of four friends — brothers Andrei (Pronin) and Nikolai (Kozlovsky), and their pals Shust (Vladimirov) and The Fatso (Bukovski). As war seems to rage deteriorating their surroundings, their boyhood illusions are affected by normal things like Andrei’s romantic sexual adventures with the older Anitsa (Khamatova) and Nikolai’s feelings for the newly arrived Vita (Sukhitashvili), as they set out with their friends to save enough money to buy their own football pitch, fix their own team earning money one game at a time.

At nearly two hours, Garpastum is set at a painfully slow pace that seems about nothing other than boys being boys. Some men might be able to connect with this right away, but as a girl I found it a bit boring. And I played football in school, tomboy as I may be, but watching match of street football after the other was tedious after a while. I found it challenging to connect for a good chunk of the film. However, the ending really pays off alongside some of the most muted beautiful cinematography that will drain any sense of little hope that may rise from reliving your golden years as a worry-free teenager. With everything that’s going on in the world, so many wars we aren’t fully aware of, it may put every little thing we complain about in perspective.

Kozlovsky and Pronin play quite strong leads, but Kozlovsky’s Nikolai proves to be a more complex character whose dreams are crushed by war as fast as it is to snap your fingers. His on-screen presence was easy to sense, and we will soon see him cast in the American *yikes* Young Adult book adaptation of Vampire Academy: Blood Sisters. And while Pronin didn’t completely disappear as it looked from his IMDb profile, his role was a little overshadowed by Chulpan Khamatova’s own presence — but this might be a bias — as the tragic Anitsa. Though it seems like she’s only there to have sex and bring Andrei into adulthood for a good part of her performance, her destiny is ultimately the exploration of every displaced person that’s ever left place to place to flee disaster and tragedy.

Director Aleksei German Ml. seems to have a knack for all this draining movie experiences, though I don’t believe Paper Soldier (starring Khamatova) is AS good thematically as Garpastum is, both have similar elements in style and pacing. However, this one seems to take the cake as the best in his filmography, though he seems to be working on Pod Elektricheskimi Oblakami (Под электрическими облаками, Under the Electric Clouds (?)) with Ekaterininskaya Anna Alekseevna who also appeared on German’s Paper Soldier.