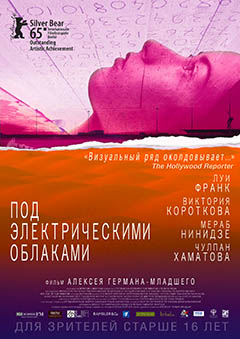 The vignette storytelling structure continues to be an ideal method for directors attempting to capture the soul and spirit of a place, a people, a nation, or the world itself. In narrative filmmaking, it provides them the means to create more characters, and thus more dramatic situations, in order to engender a variety of themes and topics required to accomplish the task. This method has its risks: due to the multitude of focal points, often times not enough attention gets paid on the micro level, which negatively affects the overarching concept(s).

To one degree or another, recent Russian films such as Ilya Khrzhanovsky’s 4 (2005), Aleksei Balabanov’s Cargo 200 (2007), and Vasili Sigarev’s Living (2012) have employed this technique to comment on that diverse and disparate nation, one permanently torn between Asia and Europe and perpetually suspended between its past and its future. Even though Aleksei German Jr.’s poetic and absorbing new film, Under Electric Clouds (Pod Elektricheskimi Oblakami), is primarily set in the post-apocalyptic “future” (2017, to be exact, the 100th anniversary of the Russian Revolution [1]), it very much attempts to articulate the spiritual and existential malaise afflicting contemporary society.

Comprised of a prologue and seven interconnected chapters (of varying lengths) centered on an unfinished skyscraper, the film appropriately opens with a Cezanne quote about drawing being a relationship of contrasts, which applies not only to its narrative structure but also to Mr. German’s impressionist use of color and light. The prologue introduces us to one of the film’s many incomplete or simply impractical architectural remnants of the once promising phenomena known as globalization and capitalism (Jem Cohen [1] would surely love this movie). A few artistic types are scattered about, commenting on the current state of affairs. A pinkish hue accents the surrounding skies and electronic advertisements (echoing the inside of the plane in the director’s 2011 short, From Tokyo [YouTube]). This brief segment segues into the first chapter as its protagonist, a Kyrgyz construction worker (Pakachakov), ambles out of the building into a cold no-man’s-land.

He turns out to be one of the many characters in the film connected to the skyscraper in one way or another, including the two adult children of the recently deceased mogul who commissioned the structure, the beleaguered architect of the endeavor (Franck) who tried to light himself on fire when the construction stopped, and the real estate agent (Zelilger) who helped secure the land for the site. The latter, a Jew, is responsible for the film’s lone flashback, as he recalls the tumultuous political period of the early nineties in the republics. Most of the actors in the film are newcomers, but it also features veterans such as Merab Ninidze and Chulpan Khamatova, both of whom have worked with the director on numerous occasions.

To his credit, Mr. German avoids turning his characters into Brechtian abstractions à la those featured in Sharunas Bartas’s The House (1997), which similarly tried to deal with Big ideas but unfortunately ended up lapsing into self-parody. He also holds off the temptation to have them regurgitate quotes like Godard’s characters. Although the film is littered with cultural and political images and references—ranging from “Terminator” to Brodsky (1) to the abandoned statues of Lenin at the site of old movie studios—for the most part they are well woven into the screenplay. In fact, one of the themes of the work is how little the younger generations appreciate the country’s rich cultural and literary past. At one point, the daughter (Korotkova) of the mogul chides other members of her age group regarding Tolstoy and War and Peace. But when the Japanese investors interested in the property greet her, she insultingly responds with “Panasonic-Kurosawa-Harakiri-Sushi.”

Those familiar with Mr. German’s earlier films, especially the striking Soviet-era cosmonaut drama Paper Soldier (2008), are aware of his penchant for long-takes and sequence-shots (not unlike his father, the late, great Aleksei Yuryevich German) and for choreographing multiple characters in a given space.  The barren, windblown landscape surrounding the skyscraper, where a good portion of the film unfolds, provides him with ample opportunities.  Mr. German likes to hold more than one point of interest within the frame and constantly recomposes during the take as characters move in and out of the frame. The characters are never subservient to the camera in Mr. German’s films. The Silver Berlin Bear won by the movie for cinematography is well deserved.

A Russian-Ukrainian-Polish co-production—it’s safe to say that Ukrainian companies will no longer be involved with Russian films (1)—Under Electric Clouds reportedly began shooting in 2011 but had to be put on hold on several occasions due to a lack of funding and the fact that Mr. German had to leave in order to help finish his father’s last opus, Hard to Be a God (2013), with which it surprisingly shares certain thematic elements. In its own way, this film is nearly as ambitious, not to mention as rewarding, if also as frustrating on occasion. At the very least, this complex cinematic mosaic manages to offer a rich, multi-dimensioned perspective on a nation at a time when it arguably deserves much less.