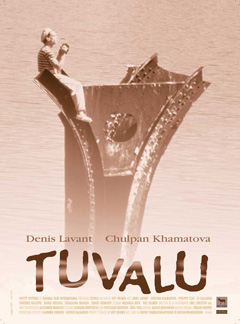 Though I really struggled choosing the poster for the film, I feel the sepia one shows Tuvalu for what it is, instead of the more whimsical colored poster [1] used on the DVD cover, which may create false expectations in style or storytelling.

Tuvalu is an experimental dramedy with romantic undertones following the life of Anton (Lavant), the son of a blind bathhouse owner (Clay), who spends his days inhabiting the lively yesterdays of his decadent business. Every day he goes about his routine as Anton and bathhouse aid Martha (Murgea) run a pantomime of their bustling pool. In reality, however, old people and bums who can barely pay visit the bathhouse constantly, to Gregor’s (Gillespie), Anton’s brother, bad luck.

Then one day, after peaking through his binoculars, Eva (Khamatova) visits the bathhouse with her father (Rosic).

Aesthetically styled as a silent film that changes chromatic tones from one scene to the next, Tuvalu might surprise people (especially if you got caught with the alternate cover). Set up as a silent, though not strictly devoid of sounds, Tuvalu isn’t dialogue dependent, relying heavily in its actors’ ability to pantomime — Philippe Clay was known for it. Unlike Kim Ki-Duk’s Dream (비몽), which had dialogue that crossed over the Japanese/Korean barrier, the language in here seems like a background detail, a prop. I was only able to make out some French and maybe some Russian (?). Though it might seem chaotic and borderline student-film in terms of production quality at times, the project brings great talent from all across Europe, including its leads, Denis Lavant and Russia’s beloved Chulpan Khamatova.

I’m not entirely familiar with Lavant’s filmography, except for his role in Tokyo! and Holy Motors — I’ve already forgotten what Mister Lonely is about — but Anton seems to be the perfect fit for Lavant’s style. Rather displaced from society (no idea why he wasn’t allowed to leave the bathhouse), unknowing of our common dealings (like traffic lights). I particularly loved the scene in which Khamatova’s Eva, using all her charmingly sexy wit, kisses Anton (pushing him to his back, in a deep manly Hollywood-styled kiss) to steal the Imperial part needed for her boat.

I’ve seen requests of fans wanting a proper Bluray release for Tuvalu, but I’m unsure on how good it would look. The letterboxed version on a fancy TV screen didn’t do the film much justice, in my opinion. However, when replaying the disc on my computer screen, the colors and frames were brought to life. Unless it’s a proper clean-up version, instead of a blown-up one, it seems like the “whimsical” qualities of this experimental film would be lost. There’s a scene of nude Khamatova dancing with her goldfish in the pool, fittingly tinted with blues and delicate lighting. How would that look with sharper edges but lost details, if not done properly?

Though the film starts out strange — cheap flying seagull shot, ha! — it follows a straightforward story structure with a LOT of comedic moments, I especially loved the bathhouse’s take on “technology“. I’m still uncertain on whether Anton and Eva should end up together, but the ending seems to  show exactly that when they begin vying for control of Eva’s boat. It seems that Evas are feisty ones.