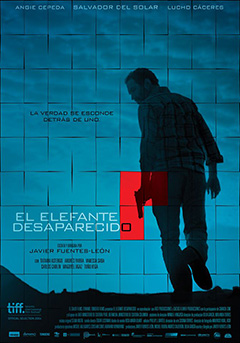 Peruvian films are going through a really REALLY good period. We have begun having genre films, yo! And it’s possible that Javier Fuentes-Leon has the most recommended Peruvian film on the site, so we were all kind of awaiting El Elefante Desaparecido with a certain excitement, with a bonus of (almost) reuniting the Don Panta class: Salvador del Solar, Angie Cepeda and Tatiana Astengo.

Though the trailer doesn’t actually tell you much or even make you want to watch it [TIFF Trailer with subs], El Elefante Desaparecido follows the life of novelist Edo Celeste (Del Solar), seriously depressed for the loss of his girlfriend Celia (Saba) on August 15th 2007, the day that an earthquake shook the southern part of the country, in a mysterious non-earthquake disappearance that had never been solved. Teasing his audience with the hint that the book he’s trying to write might actually be his last, he is contacted by Mara de Barclay (Cepeda), a woman whose first husband had also mysteriously vanished on the same day, who hands Edo an envelope with a series of magnified photographs she’s received from her now-gone husband, unleashing a series of even weirder events while District Attorney Sanchez (Astengo) is on Edo’s back suspecting him for the murder of Celia.

Fuentes-Leon takes on the Lynch-esque universe where the lines of reality and fiction blur, not to great heights, but certainly with apt skills. Though The Vanished Elephant lacks the spark that made you say Mulholland Drive was the greatest film you’ve watched last decade, it showcases solid performances from both Del Solar and Caceres, who play opposite sides of the same coin, you could say. There’s no doubt that both of them are the anchors of the story, but I was a little disappointed in the female characters playing archetypes to the author, even if Astengo gets to do a little bit more on screen than Cepeda and Saba, who is sadly severely underutilized as -mostly- The Woman in the Red Dress.

The script is ambitious, but the problem is that it lacks a solid foundation and attention to detail that other Twin-Peaks-esque adaptations like Keizoku (mostly in its first film) and especially Atami no Sousakan manage to achieve in their own spins to Lynch’s style, but then again I’m never entirely sold on the enigmatic style on its own and those examples relied in their series format. Though that doesn’t deter the film’s appeal, even if Contracorriente is a much more accessible artistic project. Much appreciated is the nighttime cinematography by Mauricio Vidal, which is a much needed aspect to give al Elefante its flare, which has been Fuentes-Leon’s greatest asset. His films have a mood, they don’t have that HD blandness in its photography from the general local movies that have been churned for the past two years.

He feels like a breath of fresh air. But I’ll still place Undertow, with all its sentimentality, above this as a better recommendation, though.