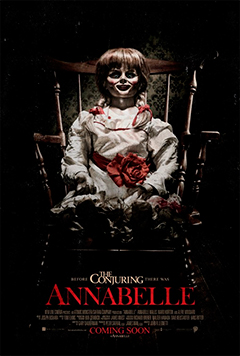 Annabelle should have the subtitle “when bad things happen to good people”. Every single character in this film is a good person and it made me feel bad for them instead of scared. If you love assholes getting killed, this movie won’t be much fun for you.

Anyway, Annabelle is a spin-off prequel of The Conjuring, where you see the origins of the creepy doll that appeared in said movie. It starts with the poor nurses that owned Annabelle at the beginning of The Conjuring. And then we flashback to the Forms, a young marriage waiting for their first child. When husband John (Horton) gifts wife Mia (Wallis) a creepy doll, she is happy because her collection of not-so-creepy dolls is complete. One night, the lost daughter of the neighbors attacks them with the help of her cultist boyfriend and then kills herself all over the doll. Guess what was the name of the crazy lost daughter, Yep, Annabelle. And thus the Forms, specially Mia’s, life is ruined.

So we have a movie that evokes Rosemary’s Baby spiced with a Charles Manson-like cult. I mean, come one, the lead couple’s name are Mia (Farrow) and John (Cassavetes)! Except now we have an artifact of the devil and it is this doll.

I appreciate that the characters made very little mistakes except the obvious one of not doing a better work at getting rid of the doll. The Forms were likeable if a bit bland, and didn’t lost any time with misunderstandings or doubts to anyone’s sanity. It was also very convenient that they were friends with Father Perez (Amendola) despite moving to another city, and Evelyn (Woodard), whose book store has a whole section of occult books. They were also very helpful and the no-nonsense kind of person that would take Mia’s claims of a possible haunting at face value.

Annabelle is a good-looking movie, you can tell Leonetti is indeed a good cinematographer and knows how to use the cameras in unnerving ways including great uses of perspectives and sight lines. Sadly, it relies a tad too much on shock value instead of a spooky atmosphere. Also, Annabelle is one lazy possessed doll. That said, the movie has some eerie moments and great sequences. The one in the basement/elevator is specially good.

So, are we expected to believe it’s a coincidence that the name of the main actress is Annabelle?